The burden of taking on extra HECS-style debt to pay for tools when wages are already low is a major reason many apprentices are thinking of dropping out, a new AMWU survey reveals.

An alarming 77 per cent of apprentices surveyed identified the cost of tools as a key issue. This comes just one year after the axing of the ‘Tools for Your Trade’ program by the Government.

Another 73 per cent also listed low wages and 59 per cent poor training as major issues.

The survey was conducted in the lead up to AMWU members meeting senior politicians in Canberra to argue against $1 billion in Budget cuts to apprenticeship programs.

The union welcomed a commitment by Labor to guarantee a set proportion of vocation education funding to re-invigorating the TAFE sector. Wednesday, June 24, was also National TAFE Day.

The survey results confirm that the Government replacing the “tools for your trade” subsidy with a HECS-style loan up to $20,000 has piled pressure on apprentices, with 60 per cent having less than a month’s pay in savings to fall back on.

Four in ten struggle to pay their bills.

This precarious existence is heightened by frustration at a lack of proper mentoring at work, made worse by bullying and harassment. 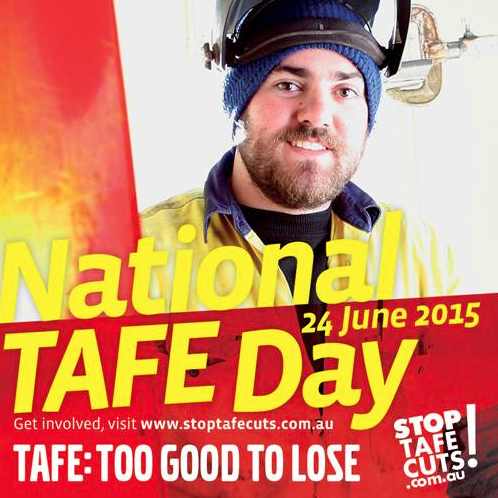 “Too many employers still see apprentices as an expense or a source of cheap labour rather than an investment in our future, the real key to lifting productivity,” said AMWU National Skills, Training and Apprenticeships Co-ordinator Ian Curry.

“Apprentices have to be mentored and nurtured, but the Government guts TAFE funding and loads them up with debt then bemoans why half of them are dropping out.

“Australia risks sabotaging our future and that is a national shame.”

Only 54 per cent of apprentices say they are fully reimbursed for training expenses -  the rest reporting their employer will not pay for both fees and textbooks, as ordered by the Fair Work Commission.

In 2014-15, the Abbott Government has cut $1 billion from apprentice programs including Australian Apprenticeship support services and abolished an array of employer-union bodies including the critically important Industry Skills Councils.

“This will effectively bring to an end 30 years of successful collaboration between employers and unions in the skills policy space,” Mr Curry said.