Vanessa and Heidi show the way in NSW leadership

Two of our newly elected officials in key NSW leadership roles have taken up the challenge in the food and print divisions, just as workers mark International Women’s Day. 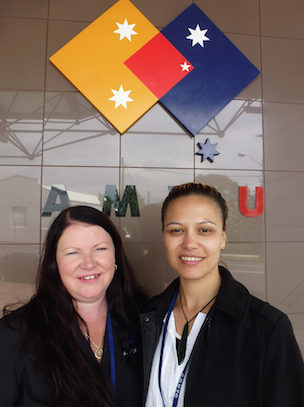 Two of our newly elected officials in key NSW leadership roles have taken up the  challenge in the food and print divisions, just as workers mark International  Women’s Day.

Vanessa Seagrove (left) and Heidi Kaushal were each endorsed by members after  working their way through AMWU ranks – Ms Seagrove as an organiser and Ms  Kaushal as a workplace activist.

Their elevation means that half of the NSW branch leadership team are women,  the highest proportion of any state. NSW unions will also join the annual march  to mark International Women’s Day this Saturday in central Sydney.

Mr Ayres told this week’s NSW Delegates Forum that he believed our late food  industry leader Jennifer Dowell would have been “so proud of these two young  women, confident of them making a great show of it.”

“I intend to make sure the union has a central presence in all areas of the print  industry, including labelling, digital, and graphic design,” she said.

Vanessa Seagrove is well qualified and experienced, having been a successful organiser with the NSW branch for 14 years.

Heidi Kaushal brings great zest and enthusiasm to her new career as a full-time official, taking over as the AMWU gained justice for members that chocolate maker Darrell Lea tried to cheat out of their redundancy.

“The delegates did the work on the floor, they made the call to us,” she said at the Delegates Forum, strongly emphasising the importance of rank and file input and communication with officials.

She knows the benefit, as until late 2014 Ms Kaushal was a senior delegate at Cerebos.

“It’s about respect for food industry workers, following through and changing with the times.”