The AMWU is supporting union calls for the Turnbull Government to reveal exactly what they did to assist Alcoa’s dramatic raid which evicted the crew of the MV Portland from this ship this morning.

The crew have been protesting on-board for months at Alcoa’s plans to make them redundant and replace the MV Portland with a foreign-owned, foreign-crewed vessel.

Security guards boarded the ship in darkness, awoke the crew and marched them to the wharf about 1 am today before escorting a foreign crew on board to sail the Alcoa-owned ship out of Portland in Victoria, bound for scrapping in Singapore.

AMWU National Secretary Paul Bastian backed calls by the Maritime Union of Australia and ACTU for federal ministers – particularly Deputy PM Warren Truss - to come clean on what they knew of this  draconian Alcoa raid on unionists and what they did in permitting the ship to sail. 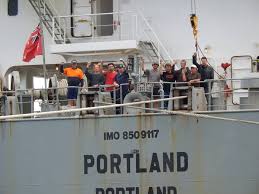 Evicted: the crew of the MV Portland.

“Our membership in Portland has been supportive of these seafarers, who were fighting for local jobs and the right of Australian crews to man ships on the trade routes between Australian ports,” Mr Bastian said.

“This tactic by Alcoa is an vicious attack on Australian workers, who were removed from their  place of work in the dead of night and the Turnbull Government showed it’s true colours by allowing this to happen.

“Minister Truss must come clean on the Government’s role in this, why the MV Portland was given official permission to sail with a foreign crew, leaving these local workers on the wharf without jobs.”

Alcoa’s actions would not have been possible without the involvement of the Department of Transport and Regional Affairs granting a temporary licence for a foreign ship to operate the Portland’s route and the Australian Maritime Safety Authority (AMSA) clearing the foreign crew to man the vessel.

This raises serious questions about the Government’s complicity in the loss of Australian jobs.

The Department of Transport and Regional Affairs, which is headed by Mr Truss, granted Alcoa a temporary licence to ship cargo from Western Australia to Victoria on a foreign ship, with a foreign crew.

Coastal shipping legislation dictates that ships operating on domestic trade routes have to be Australian flagged and crewed. The intent of the temporary licence is for ships usually engaged in the international trade, but calling into a number of Australian ports.

The ACTU has previously met with all unions concerned to discuss the future of the MV Portland and a resolution was moved at November’s executive condemning Alcoa and demanding the re-instatement of the Australian crew.