Shipbuilding workers are ramping up pressure on the Australian Government to get serious about helping end the slavery of overseas shipbreaking labourers who dismantle the hulks of disused vessels for scrap.

The AMWU is demanding the Turnbull Government reverse its refusal to sign a global Convention which would intensify pressure on yard owners in the Indian sub-continent to give workers basic safety protection and raise their wage above $2.50 a day.

A union team recently travelled to the shipping meeting of global union body IndustriALL, held in Bangladesh where a quarter of the world’s disused freighters, cruise ships and other craft are broken up and sold as scrap for millions of dollars.

BAE Systems delegate Jon Primrose and Assistant National Secretary Glenn Thompson were shocked at what they saw around Chittagong, which has over 200 ship scrapyards.

Mr Primrose saw men working with oxy acetylene torches high on the superstructure of hulks with no safety barriers to stop them slipping and falling.

“Some were wearing shorts, no work boots, no gloves when oxy cutting,” he said. “The steel plates would fall into black mud, covered in oil and they were dragged 50 metres through the shallows to the shore.”

Mr Thompson said: “We saw people working away in primitive, unsafe conditions while oil and chemicals were washing against the shoreline. Some were hauling away what appeared to be asbestos sheets.

“It was a terrible sight.” 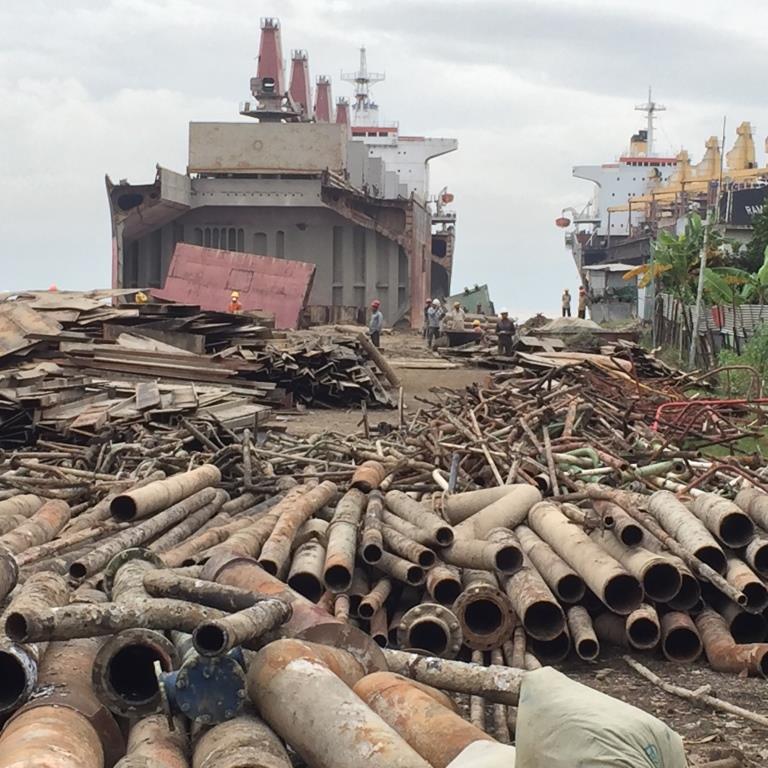 Rugged workplace: the Bangladesh shipyard where the AMWU men visited.

The IndustriALL  shipworkers meeting decided to re-enforce union efforts to get governments to adopt the Hong Kong Convention for the Safe and Environmentally Sound Recycling of Ships.

It has never taken effect because it needs to be ratified by at least 15 countries which represent 40 per cent of world merchant shipping tonnage and recycling.

Only three nations have signed the Convention – not including Australia.

The AMWU has asked the Turnbull Government to sign on, but last month Transport Minister Warren Truss replied it “is not a priority…at this point in time.”

Mr Thompson said this was no excuse for a nation as wealthy as Australia not signing.

“It’s a disgrace the Australian Government will not carry through on human rights obligations to ... pressure the ship recycling countries of India, Pakistan, Bangladesh and China to reform the ship breaking industry,” he said.

“These are workers getting killed and injured in appalling safety conditions, most of the surviving workforce won’t live beyond middle age and the industry does appalling environmental damage.

“Yet the Australian Government won’t help bring the main global Convention into force.”

*The Bangladesh meeting also saw further progress made on the co-operative network of unions at multinational defence contractor BAE Systems. Our delegation met union officials from the US.