Union takes ATS cause to Canberra

AMWU auto industry members have doorknocked the offices of influential MPs in Canberra to explain why $800 million should be used to help grow new jobs rather than be hoarded by Coalition Government bean-counters.

The group led by National Secretary (Vehicles) Dave Smith also met senior Labor MPs to affirm that the ALP National Conference decision to re-direct the ATS funds to industry transition would be implemented if they won the upcoming federal election.

“Our day in Canberra was well worthwhile, we were able to explain how crucial it was to our 15,000 auto members to have the ATS broadened to help supply-chain firms. Our delegates got a very good hearing,” Mr Smith said.

“The non-government MPs we spoke to seemed to understand that many workers will need extra training and skills recognition if we are to minimize the impact of unemployment on vulnerable communities in South Australia and Victoria when the motor vehicle producers close.”

South Australian member Murray Akehurst said the aim was to get the criteria for ATS funding broadened beyond the supplying Australian-based car makers, so that finance was available for firms to transition to supplying global export markets after Ford, Holden and Toyota stop production.

“We want to broaden that criteria so firms can get the funds to re-tool,” said the Holden delegate.

Mr Akehurst said firms were finding it tough to get bank finance because the Government was not offering any help beyond the major car makers finishing.

Mr Akehurst said: “We were very impressed with the how receptive both the cross-benchers and the Opposition MPs were, but unfortunately no Government MPs would meet us.”

That included South Australian MP and Industry Minister Christopher Pyne, who has confirmed that he will stop all ATS funding in 2017, with leftover funds of up to $800 million put into consolidated revenue.

Just $20 million was allocated to auto supply chain diversification by the Government and only $3 million of this was new money in response to the closures of Toyota and Holden. 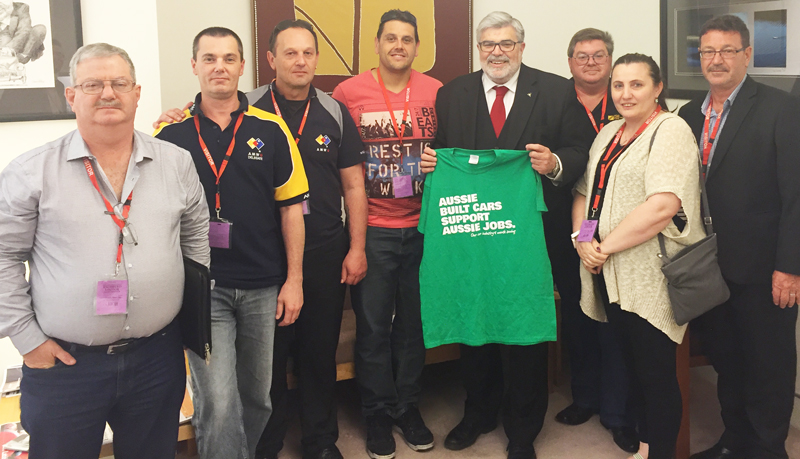