The AMWU has joined asbestos disease victims groups in slamming the shock decision of the NSW Baird Government to axe that state’s Dust Diseases Board.

The union has demanded Premier Mike Baird overturn the sudden dismantling of the Board, which has been the arbiter of compensation claims from people – usually workers - suffering from dust-borne diseases for nearly 90 years.

NSW State Secretary Tim Ayres condemned the Baird Government for giving no public warning or consultation over the decision, which was not formally announced but communicated to Dust Diseases Board members by phone yesterday (Tuesday).

The change comes as part of a NSW Workers Compensation restructure, with the Tribunal’s functions to be taken over by an “expert” advisory committee which employers will also sit on.

“Mike Baird has delivered a kick in the guts to victims of asbestos exposure and their families,” Mr Ayres said.

“This is not simply a piece of Government bureaucracy. The Board independently ensures that the many victims of one of Australia’s worst industrial killers are fairly compensated and cared for.

“To casually announce that the Board will no longer exist shows a callous attitude that is beyond belief.” 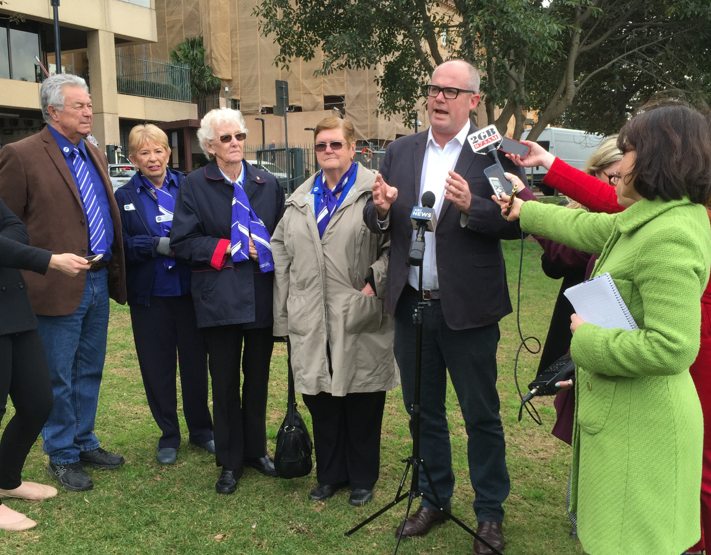 Mr Ayres predicted that with the number of asbestos-related disease cases continuing to rise that removing the Board would mean longer delays, extra expense - and potentially lower payments.

That would hit hardest the victims of mesothelioma, whose need to promptly settle their claims is urgent as most usually are diagnosed as having only a short time to live.

The Board’s legal significance has spread far beyond NSW, as it has made important  judgements on industrial diseases issues common to all states including hearing hundreds of claims from asbestos victims in the past 40 years.

Mr Ayres stood at a media conference today with the President of the Asbestos Diseases Foundation of Australia, Barry Robson, and three widows of asbestos victims.

Mr Robson was deeply sceptical about the Government’s promise not to cut benefits and predicted that the only winners would be law firms and insurance companies.

He predicted the method of calculating benefits would change and was also concerned that household services provided to help victims would be wound back.

It was less than a year ago that a NSW Upper House Inquiry into the Dust Diseases Board, chaired by a Liberal MP, commended the board for performing in “an exemplary manner”.

Mr Ayres said: “The Government’s own committee has found that this is one of the most effective agencies operating out of the NSW Government – the Premier needs to immediately reverse this decision.”