The AMWU was part of a delegation to Canberra this week warning of the devastating impact if Australia Post implements proposals to cut the frequency and increase the prices of letter deliveries.

Also sticking up for pensioners and everyone not online was AMWU Retired Members’ official John Mathieson, who said millions of Australians rely on daily post as a primary form of communication.

Their lobbying was to combat proposals being pushed by Australia Post Chief Executive Ahmed Fahour to reduce its Community Service Obligation to deliver daily mail to 98 per cent of households, which requires changing federal law. 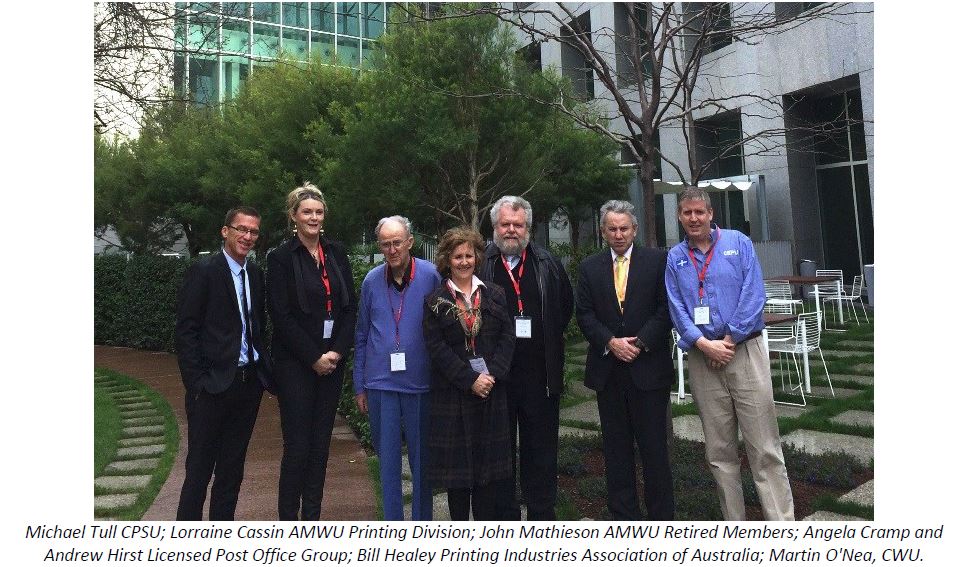 A study done for Australia Post gives options including cutting deliveries to as few as three days a week or making consumers pay $1 or more to assure next-day delivery of a letter – a “two-class” mail system.

Ms Cassin said the proposed changes could have a huge impact on mailhouse costs, employment and whether bills arrive in time to be paid by consumers.

“The previous oversight of bulk mail prices and services by the Australian Competition and Consumer Commission should be restored,” she said.

“Any change to the structure, frequency and price of mail services must be critically scrutinised by all MPs.”

The group aims to join with MPs for a bi-partisan review of Australia Post’s future, with proposals presented for action by the Senate Communications Committee.

Ms Cassin is calling on the government to establish a process so that Australia Post has to consult with stakeholders and develop a plan moving forward.