The AMWU this week advances its mission to protect workers in labour hire when its case for tougher regulation of the sector is put before a Victorian Inquiry which is resuming in Melbourne.

The union on Monday joined a Victorian Trades Hall rally on the steps of State Parliament, where workers told of the insecurity in their lives and exploitation from labour hire companies which failed to pay proper award rates and dismissed safety concerns.

In 2015 the AMWU Victorian branch won over 30 labour hire agreements setting common standards and conditions of work, with portability of leave and severance pay helping to set a solid foundation and give workers some certainly in an unstable sector.

These real union gains such as a common wages standard with better job security can be entrenched with stronger laws, which should be a flow-on from the Victorian inquiry the AMWU urged the State Labor Government to launch.

“The AMWU calls on the Inquiry and State Government to use this opportunity to take a real step forward for thousands of working people who suffer from constant uncertainty,” said AMWU Victorian Assistant Secretary Craig Kelly.

The AMWU is pushing for portable long service leave and a government compliance unit to police labour hire operators, who should be required to pay an annual fee and a bond to ensure they abide by a proposed code of conduct.

Joining Craig Kelly was boilermaker- welder Harry Marshall, with experience at over 40 labour hire agencies over the past 12 years, but never permanency. 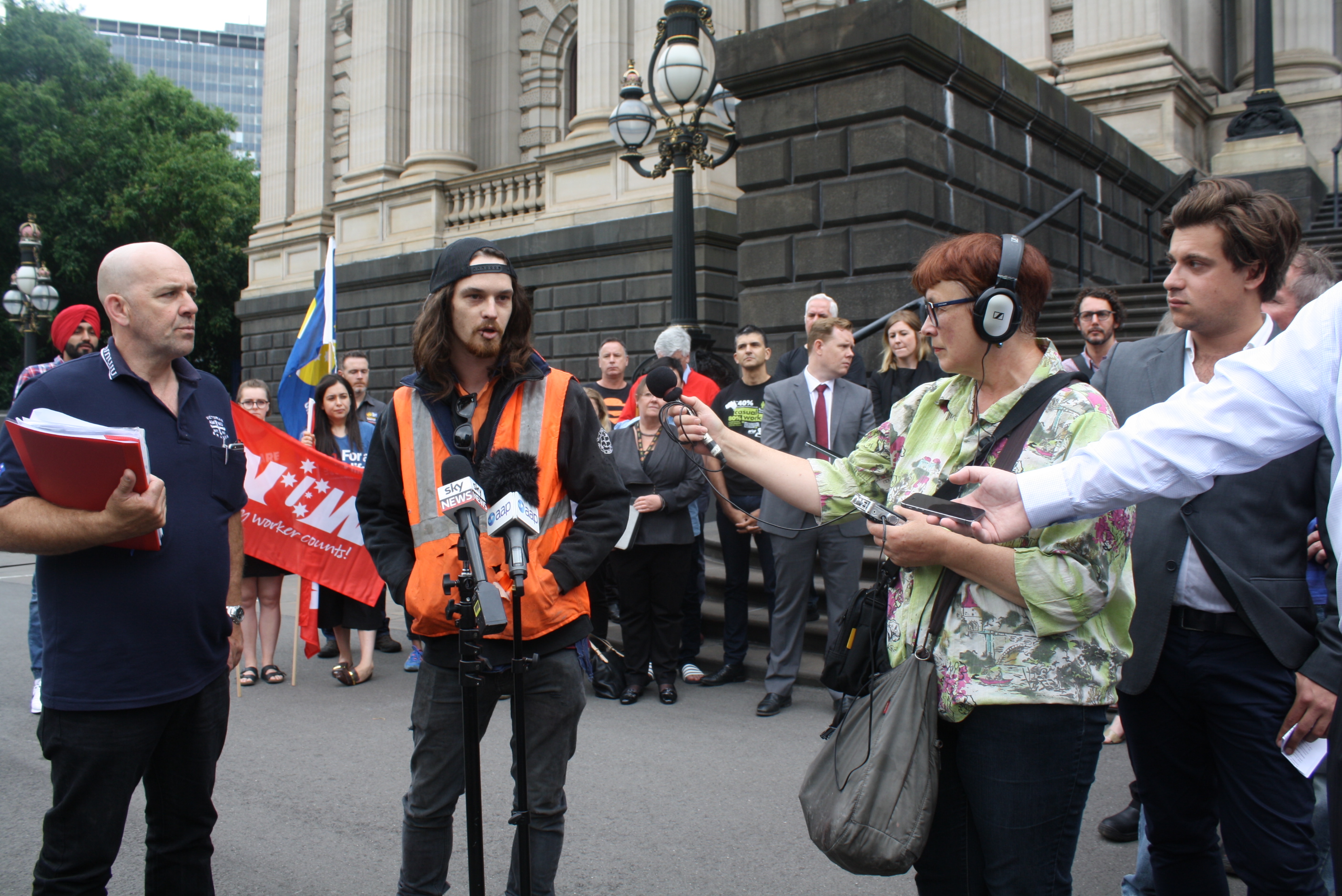 He backed the AMWU’s stance by contrasting strong union sites, where bosses are expected to pay properly and strictly obey safety regulations, with other sites where labour hire firms underpaid workers.

“If you get there and speak up about safety, you don’t know if you’ll have a job the next day, a lot of people don’t have a leg to stand on,” said Mr Marshall, 27.

Mr Marshall told the Labour Hire Inquiry in Geelong last year about one agency which deployed him in 2015, paying well below the award standard.

“But at the end of the day work is work and sometimes you have no option but to accept work when you need money to help yourself or your family survive,” he said.

Mr Marshall said the agency sent him to quarry site where workers had seen illegal operation of equipment, safety incidents went unreported, there was no first-aid facility and the amenities looked like they had never been cleaned.

He was texted not to come back to work the next Monday after questioning a bullying foreman about safety, including his orders for a crew to weld a steel frame near huge piles of dry wood chips. "You'll be right" was the foreman's safety instruction.

Mr Marshall supported a strong AMWU presence in the industry and hoped the Inquiry would lead to gains including portability of certain leave entitlements, severance pay, guaranteed wages standards with health and safety regulations being strictly enforced.

“I don’t know where we’ll be in 10 years time if we don’t get the ball rolling now,” Mr Marshall said today.

Inquiry hearings will be held this month in Melbourne, Shepparton, Ballarat,  Melton and Morwell.