PM must step up to Arrium steel plate

The AMWU is calling on the Turnbull Government to show leadership by underpinning the continuing operations of Arrium in order to protect thousands of jobs and give the company time to trade it’s way out of trouble.

Administrators called in by the Arrium board have said it’s business as usual at the Whyalla steel smelter, mines and associated steel production facilities across eastern Australia.

“Relying on the market mechanism to work out whether Arrium’s operation and the town of Whyalla survive won’t cut it.”

He said securing the operations at Whyalla  must be seen in the wider context of securing the nation’s only home-grown source of construction steel.

“The implications of allowing a large steelmaker to go under can’t be underestimated – particularly ahead of a federal election,” he said.

SA Assistant State Secretary Colin Fenney said it underlined the necessity for the Turnbull Government to carry through on backing a target of 90 per cent Australian steel in all government projects – federal, state and local.

The AMWU will also be putting the highest priority on ensuring that guarantees by the administrators yesterday to workers that their entitlements would be prioritized above unsecured creditors are backed up legally, in writing.

Australian banks are among mainly unsecured creditors owed a total of $2.8 billion in debts by Arrium, but the $500 million owing to its workers in entitlements must take priority, Mr Thompson said.

The administrators Grant Thornton are expected to hold a creditors meeting within the next five working days.

Workers at Whyalla steelworks and company mines in the region were spoken to in meetings by the administrators yesterday.

AMWU delegate at the Iron Duke mine, Andrew Mayne, said workers realised the “time of truth” had arrived at Arrium after years of incompentent management investments.

“They couldn’t just blame the iron ore prices and the steel price for this, they’ve made bad moves and there’s a feeling the administrators could not possibly do any worse in trying to sort the operation out,” he said. 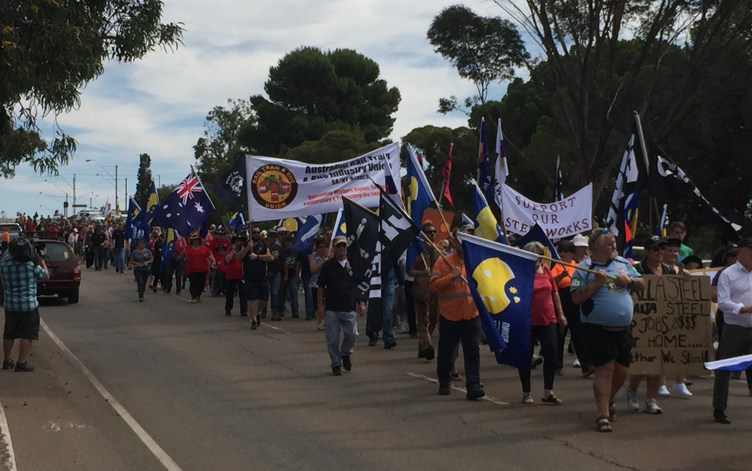 Save our industry and our town: Whyalla residents including Arrium workers march this week as the Senate Committee into the steel industry held hearings in the steel-making regional centre.

He said workers had had “a gutful” of wage cuts and sacrifices when labour costs were only a small part of the entire financial picture at Arrium.

“We’re really worried, in 6-8 weeks it could go either way, but while the administrators are here we need the Turnbull Government to support the steel industry,” Mr Mayne said.

Mr Mayne was part of a union delegation to Canberra last month backing the AMWU’s call to the Senate Inquiry into the steel industry.

The Senate Committee sat in Whyalla this week, as Arrium stock ceased trading on the sharemarket.

A town rally of 500 people called on governments at all levels to act to ensure the steel industry - upon which the town is totally dependent - does survive.

Mr Fenney said the South Australian Government had an acceptable local procurement policy, but  foreign steel was being used on major NSW Government jobs in Sydney including the Darling Harbour project in Sydney and the city’s $8 billion Northwest Rail.

The AMWU is calling for tightening of anti-dumping and steel quality regulations, a government Steel Investment Council to assist with capital funding and establishment of a clean energy program.