The AMWU has pushed the boat out on the Future Submarine build by meeting French contractor DCNS while the Turnbull Government lets local content and jobs on the $50 billion mega-project silently drift from its post-election agenda.

AMWU National assistant Secretary Glenn Thompson had a positive discussion last week with the Chief Executive of DCNS Australia, Sean Costello, when they met at our Sydney offices.

But there has been zero response so far from Defence Industry Minister Christopher Pyne on our request for detailed talks on local industry’s role being specified in the initial submarine contract, despite Mr Thompson being in Canberra this week to meet MPs.

Mr Thompson and Mr Costello went over DCNS plans on building the 12 submarines in Australia after the French defence firm won approval of the Federal Government in April to complete the project in Adelaide. 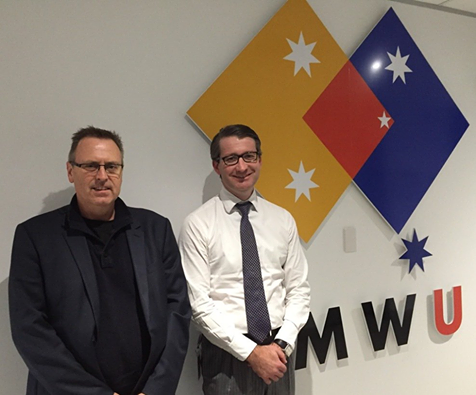 “It was a positive engagement ,with DCNS outlining the process after the first stage of the future sub contract with Defence Department, which is expected later this year,” Mr Thompson said.

“We’re deeply concerned about local jobs and how the French supply chain and the Australian supply chain will interact, that’s fundamental to the entire project.

“Mr Costello assured us it was intended to have some of the French supply chain re-locate to Australia and interact with local industry but the real detail on that is likely to be settled within the first-stage terms of the initial contract with the Defence Department.”

Our union wrote to PM Malcolm Turnbull stressing that it is imperative these contracts have explicit clauses binding on the French to maximise  Australian industry involvement and the integration of French companies within the local supply chain.

Mt Thompson called on the Federal Government to urgently instigate a Defence Roundtable of industry, unions and state governments to co-ordinate the process and ensure transparency during the initial contract negotiations.

That roundtable needs to focus on the contract with DCNS specifying the use, identification and certification of suppliers, especially in the first submarines built.

It must also set out clear benchmarks and an obligation on DCNS to help Australian defence suppliers meet these requirements, whether they be technical or about accessing finance.

Senator Xenophon put the key issues over Australian content and monitoring of the contract process in questions to Defence Minister Marise Payne - particularly a 70 per cent minimum local industry content. The minister would give no commitment except to "maximise" local involvement.

Mr Thomson said: “Mr Turnbull handballed the involvement of Australian defence suppliers and what we expect from DCNS  to Christopher Pyne, but the AMWU hasn’t  heard a squeak from the Defence Industry Minister since before the election.

“He was all over us when his own job was on the line, but now were getting down to nuts and bolts negotiations on the future of Australian defence industry jobs he’s letting it drift like an old hulk.”