Shipbuilding workers in Spain are celebrating after the Turnbull Government announced it would build two supply ships worth $2billion in the European nation rather than Australia, creating 3000 Spanish jobs.

“Malcolm Turnbull is more interested in securing his own job than he is in securing the jobs of Australian shipbuilders,” said Mr Thompson.

“1800 shipbuilders have already lost their job, 1300 more are at risk, and the Prime Minister is sending jobs to Spain.”

In June 2014, at a Senate Estimates hearing, the Government committed that there would be Australian Industry Participation plan that would involve Australian shipbuilders in the building of the supply ships. However, the involvement of local industry and content in these supply ship contracts is non existent.

“Yet again, the Government has broken a promise to shipbuilders. They have said they would involve Australian shipbuilders but this announcement has squibbed it. No local suppliers were consulted on this build,” said Mr Thompson.

“You’ve got to ask yourself; why is the Government building our ships in Spain when we have the capacity to build them in our own backyard?”

Workers at the South Australian shipyard were shocked and angry at the announcement as it comes off the back of further job losses announced at the yard last week.

“Malcolm Turnbull is a waving a red flag to the bull by deserting Australian workers for a Spanish build. These shipbuilding workers are intent on making his Government pay for deserting them,” said Mr Thompson.

“There are lots of people concerned about the treatment of this industry by the Government. Shipbuilding workers are intent on speaking to every voter in every marginal seat with an election around the corner. We are going to send the Government a message in the only way they understand,” he said. 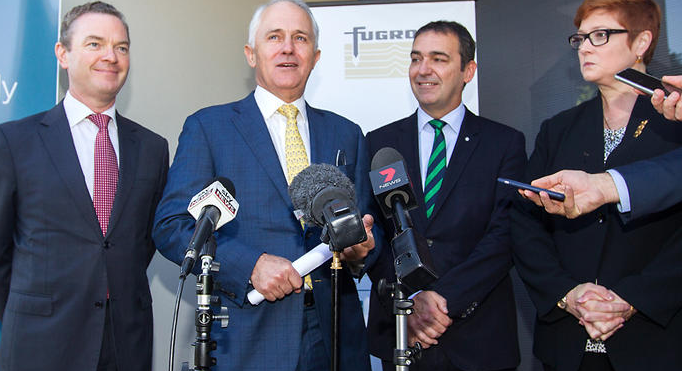 Big talker: PM Malcolm Turnbull and his ministers announced plans for a possible defence centre in Adelaide this week but he had left the state by the time ASC workers learned his Government would fund 3000 new ship jobs in Spain.