AMWU Rail Delegates have been pushing for the local production of rolling stock as a key part of new railway infrastructure projects which now have support from both sides of politics.

In a recent meeting with Labor industry spokesman Senator Kim Carr in Melbourne, AMWU delegates said the benefit of spending billions of infrastructure dollars on rail would be limited if the locomotives, wagons and suburban trains and trams to run on new lines continued to be imported.

The Victorian AMWU delegation told Senator Carr their priority was that the Victorian Labor Government’s policy of a minimum 50 per cent Australian content on all rolling stock purchases should also be adopted as Federal Government policy – whoever is in power.

Delegates said they would also like to see a guaranteed proportion of the workforce being apprentices, to ensure skills are passed on. 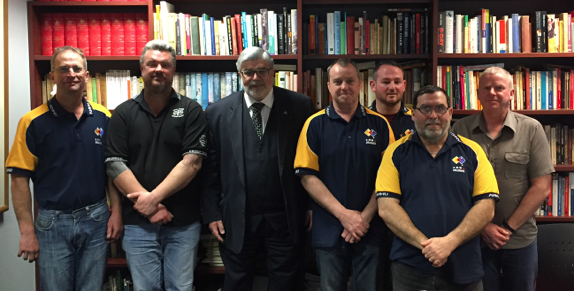 AMWU National Rail Coordinator Finbarr Dowling said experience showed local builders were usually cost competitive if the cost of transporting and re-working the imported models for local needs were factored in to the initial tender price.

The delegates from EDI Downer, UGL in Ballarat and SSR in Bendigo said they were ready to increase the pressure on both sides of politics to deliver for local workers and the industry.

“In Victoria we definitely have the workshops and facilities to manufacture rolling stock at a competitive level. Government agencies do not need to send orders overseas without giving locally-based firms a fair chance to compete,” said Downer EDI delegate Adrian Oxley.

The AMWU Rail Delegates are now planning a trip to Canberra, where the change in Prime Minister has meant both sides of politics are putting rail as an infrastructure priority for cities.

The AMWU push into Canberra follows up on some great work by Rail Delegates in Victoria and NSW and in WA, where many state MPs have signed the Union’s petition in favour of local content.