AMWU officials met with workers from leading Tasmanian shipbuilder Incat yesterday to discuss how the island state can capitalise on the firm’s recent wins in securing major commercial ferry contracts.

Tasmanian State Secretary John Short spoke with workers on how they believed skills and productivity in shipbuilding across the state could be enhanced to give manufacturing firms the opportunity to leverage off the success of Incat.

The company this week confirmed it had been engaged to build a 112-metre ferry for a Danish operator, following its success last month in winning $50 million in contracts for six Sydney ferries.

This has layed the groundwork for Tasmania to bid for major work on the upcoming tender for 21 Pacific patrol boats for the Royal Australian Navy – a $600 million opportunity.

Mr Short met with AMWU members and other workers from the company, where the workforce could grow from about 250 to as many as 400 due to the ferry contracts. 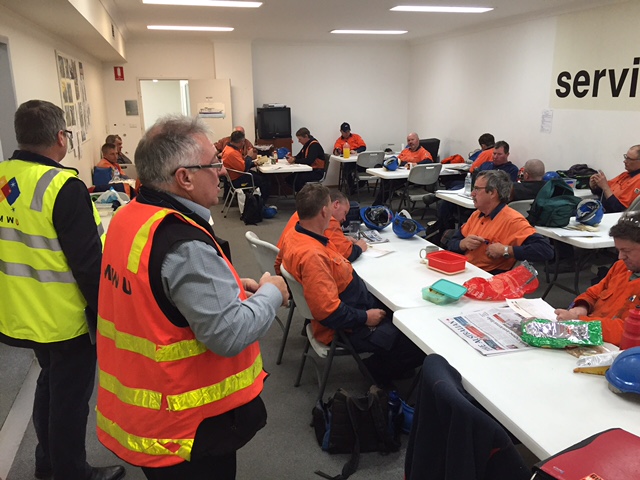 AMWU Assistant National Secretary Glenn Thompson and  national Industrial officer Don Sutherland also spoke with  workers on how Tasmania could claim its share of work that the  mainland eastern states are all lobbying for.

They called on the Tasmanian Government to be more active in  joining industry in lobbying to win the work or to co-operate in  sharing it with the other states.

Tasmania has a bid to win the tender, led by the TasPac  Maritime Group, made up of joint-venture partners ThysseKrupp  Marine Systems Australia and UGL Engineering, along with  vessel construction by Incat and Haywards Steel.

“We are keen to work with industry to improve skills and  productivity. We want to give Tasmania a real chance at this  project,” Mr Short said.

“A strong shipbuilding sector is the shot in the arm that  Tasmania needs as the sluggish economy suffers from high unemployment and low consumer confidence. For every job we create in manufacturing, we create four in the rest of the economy.”

Mr Thompson said a competitive Tasmanian shipbuilding sector would be good for local workers but also the entire nation.

“It’s going to force everyone to lift their game and ensure a strong industry going forward,” he said.