Strike breakers flown in by McCain

Desperate McCain bosses are flying in managers and workers from offshore to try and maintain production of french fries and other foods hit by AMWU industrial action at its Ballarat plants.

McCain were caught out bringing about 10 non-union workers from its New Zealand  plant into Victoria in a bid to meet the impatient demands of huge customers including McDonald’s.

Our colleagues at the Kiwi union E Tu blew the whistle on McCain, disgusted at the tactic.

It followed a production fiasco last week when McCain managers from Tasmania only succeeded in making a dangerous mess for AMWU members who temporarily returned to work next day at the Ballarat french fry plant.

One worker had to be treated at hospital for burns to his arms from cooking oil when a chip fryer pipe broke after not being cleaned properly.

Members from the french fry plant, prepared foods plant and cleaning crews are a few weeks into a campaign of industrial action after four months of McCain stalling in talks for a new enterprise agreement.

Each area is taking strike action for one or two days a week, usually beginning Wednesday.

At the heart of the dispute is a move by McCain’s to use of cut-price contractors to replace jobs of McCain employees, a similar thrust to undermine pay and conditions as at CUB, Alcoa in WA and the recent successful dispute at Thorn Lighting in Sydney.

McCain already has a small number of people working for an external contractor in potato receivals, with AMWU concerns that bosses plan to extend this to replace permanent store workers, cleaners and others. 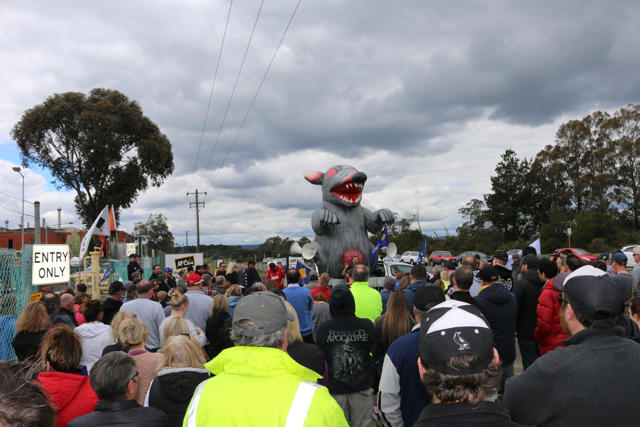 Ditch the Kiwis: McCain workers protested outside the plant last Wednesday against the company's stance, enlisting the help of "Scabby" the blow-up rat from the CUB dispute  to make their point about non-union labour.

“We are determined to ensure that any contractors’ labour gets the same wages and conditions as every directly employed person at McCain, to take away the financial incentive to undercut our members,” said AMWU organiser Angela McCarthy.

“We are looking at clauses in our next EBA to put restrictions on underpayments to contractors.”

McCain has offered members pay rises, but they are concentrating on the company’s attack their job security.

Ms McCarthy said the other major issue is McCain’s unreasonable refusal to honour its obligation to give paid leave, as it tries to reduce staffing levels while increasing production.

The McCain French fry plant at Ballarat is among the multinational’s most profitable in the world.

But workers have been refused annual leave when asking up to eight months in advance, with one case needing to go to arbitration to gain the leave.

Another member’s request three months in advance to take a few weeks of long service leave to attend a wedding interstate was knocked back on the basis the worker “might” be needed.

“McCain are abusing people’s entitlement to leave, they are treating it like some sort of privilege, not a legal right,” she said.

“They are consistently decreasing staffing levels across the site to cut costs, despite this operation being very profitable for them. This is not at all about money, it is all about attempted management domination.”