Our union has had one of its biggest wins in a long time as the Carlton and United 55 were reinstated with full pay and conditions. Like many of our members, these 55 employees were hardworking, skilled and experienced. Collectively, they had more than 1000 years’ experience between them, and were a huge asset to the company they worked for. 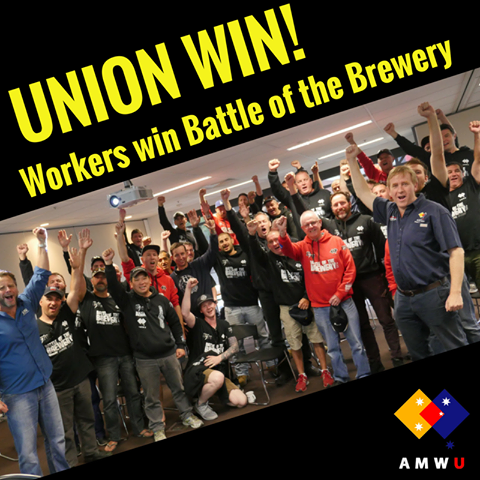 The Carlton and United brewery in Abbotsford, Victoria, where they worked alongside ETU members, was and is one of the most profitable and productive in the country. Their parent company, SAB Miller, made more than $2.7 BILLION in the last financial year.

Yet six months ago the company told our members they could reapply for their jobs at 65 per cent less pay, because they were changing the maintenance contract.

But our members refused to back down, and the obvious and clear injustice committed against them inspired a nationwide union movement backlash against CUB.

For the following six months the CUB55 held the line, supported by unionists from around the country, including here in WA. While they are back at work now, victory was never assured until the very end.

While we have won a great victory, we should also learn lessons from this struggle.

One is that unity can prevail even against great odds. I have no doubt the CUB55 succeeded against one of the biggest multinationals in the world because they spoke with one voice and received such great support from right around Australia. There is no way a non-union site could have prevailed.

The second is that we must be bold and creative in finding industrial solutions outside the Fair Work Act framework to get results.

Which proves my final point: our Fair Work Act is hopelessly broken. We must not forget that what Carlton and United did was completely legal, has happened before and will happen again.

It beggars belief that our entire movement had to wage a six-month all-out campaign to reverse such an obvious injustice.

The union movement must learn from this. We won and we can do it again. But we also need long-term solutions such as improved Awards, a serious crackdown on dodgy labour hire outfits and a return to whole of industry bargaining.