Freedom of assembly: the AMWU's Glenn Thompson leads our community protest outside the South Korean consulate in Sydney this week.

The jailing of Han Sang-gyun, the president of South Korea’s equivalent of the ACTU, for five years over a series of union protests last year has caused global outrage.

The AMWU co-ordinated this first Australian protest to call for six officials from the Korean Confederation of Trade Unions (KCTU) to be released from custody and for the charges against 14 others to be dropped.

Our rally outside the South Korean consulate co-ordinated with the union rights network for the southern hemisphere, SIGTUR and built on demonstrations at diplomatic missions in nations from the Philippines to Argentina.

The trade union officials were charged for organising and directing a largely peaceful “People’s Rally” of over 100,000 in Seoul last November against a two-tier wage system and harsh industrial laws.

Thousands of security police used water-cannon and tear gas against the crowd, inciting fighting and causing serious injuries which the authorities used as a pretext to prosecute leaders of the KCTU.

Sydney unionist Yong-Nam Kim , who fled South Korean discrimination years ago, attended to show his solidarity with the Korean people who are  resisting harassment .

He joined AMWU National Secretary Paul Bastian in leading the crowd on a chant for human rights – in Korean. 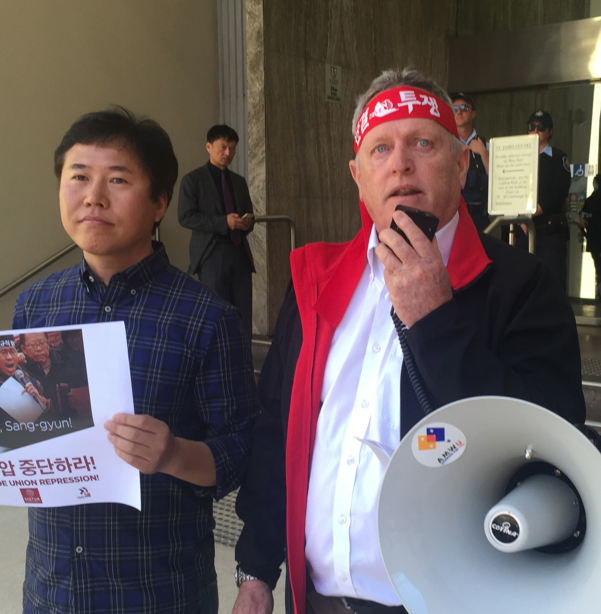 The Australian-NZ chapter of international union federation IndustriALL, under the guidance of AMWU President Andrew Dettmer, has also written in protest to the South Korean ambassador to Australia.