Shipbuilding was the winner last weekend when AMWU members in Perth handed out thousands of leaflets to AFL supporters outside Subiaco Oval before the big Eagles versus Dockers derby.

AMWU shipbuilding members were on hand a few hours before match time and the fans couldn’t miss the “Save Shipbuilding Jobs” banner as they made their way from Subiaco rail station to the stadium.

Members from BAE and ASC handed out leaflets explaining why it’s vital to retain Australia’s capability to build and maintain $250 billion worth of naval vessels needed in coming decades.

It capped a week during which shipbuilding companies, the Federal Government and a major productivity report it commissioned all arrived at the conclusion the union reached long ago – that a continuous build was essential for Australia’s defence and economy. 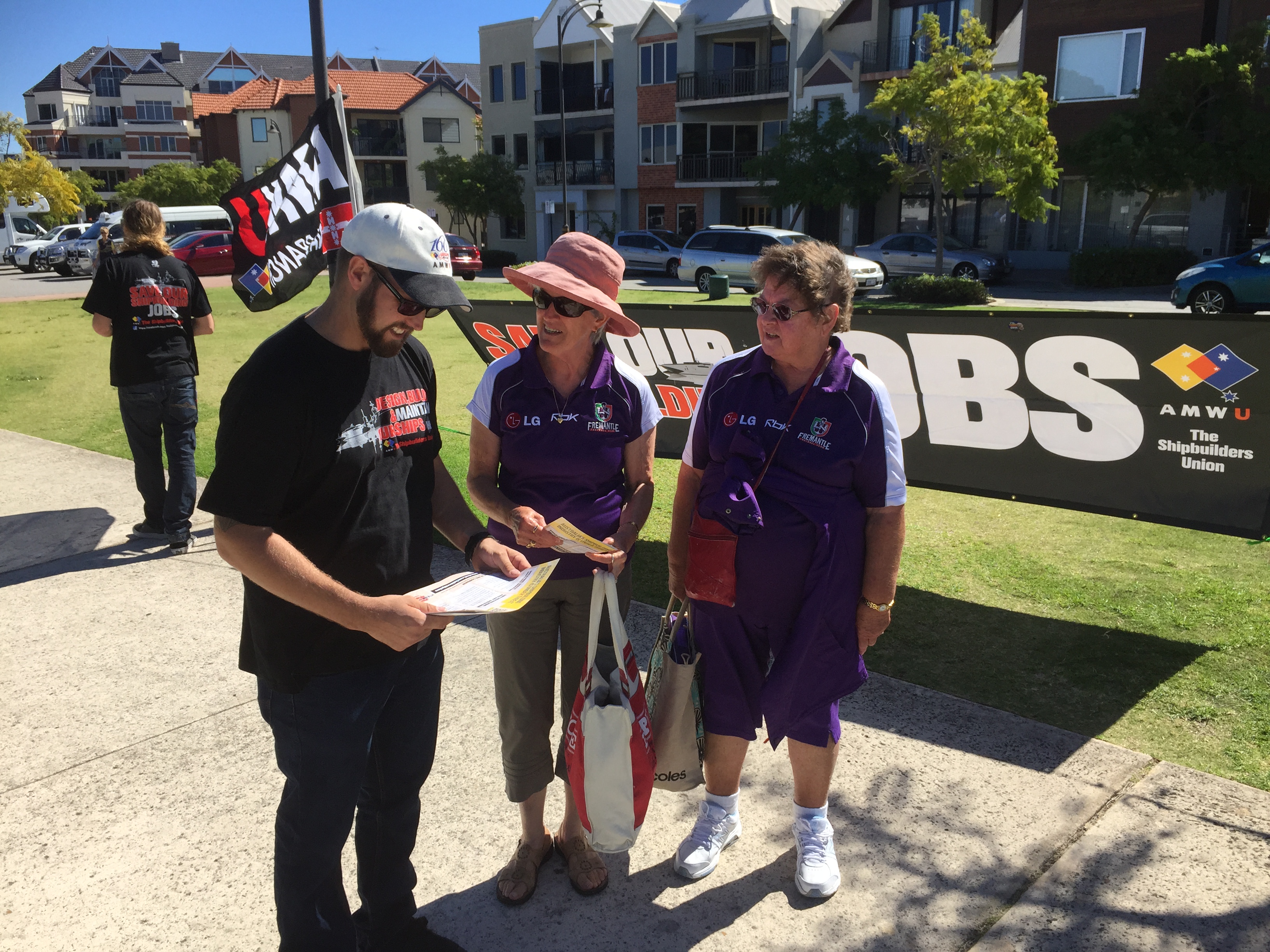 Anchors away: AMWU delegate Jon Primrose gets some Fremantle fans on board.

Activists stood close to Subiaco Oval’s entry  gates, getting hundreds of signatures on our  petitions and pledge cards to be sent to  politicians.

“It was good, we’re hoping everyone read the  flyers and will use our facebook page to learn  more about the campaign,” said BAE delegate  Jon Primrose.

“The game didn’t go well for the Eagles  supporters, so by half time many would have  wanted something to distract them from the  footy so they might have had a read on the way  home.”

It was the first WA community campaign  activity since members’ recent campaign  training. Training also took place for Adelaide  members last week and is coming up in  Newcastle. Members plan to take the campaign  to the streets around the country, spreading the  word about the campaign.

Also in Adelaide last week, a visiting Senate  Committee held hearings into shipbuilding  productivity as the Federal Government  released a review into the industry  by the US-based Rand Corporation.

“Executives from BAE and ASC gave evidence that productivity on the Air Warfare Destroyer project had jumped 30 per cent between ships one and two, with a further productivity boost expected with ship three,” said AMWU Assistant National Secretary Glenn Thompson.

“It proves our point, which the companies and even the Abbott Government now support – a rolling build is essential to the ongoing development of skills and productivity.”

The SA and Victorian Premiers last week also formalised an agreement to co-operate on defence manufacturing, both  backing the Senate Committee’s earlier finding that two navy supply ships and other  vessels should be built in Australia.