The Abbott Government’s case for sending the building of our navy warships offshore has been blown out of the water by damning expert evidence at Senate Committee hearings in three states.

The union congratulates shipbuilding members for the many months of hard work they have put in to get to this point.

Rallies by AMWU members in Perth, Newcastle, Melbourne and Adelaide set the scene for hearings with testimony from workers, shipbuilding employers and industry experts that offshoring risked leaving Australia unable to defend itself.

The economic and defence case for a rolling build of new supply ships and future frigates leading into a local submarine program was so compelling that it won over Liberal MPs including South Australian Senators Sean Edwards and David Fawcett.

Liberal Senator Edwards is the Deputy Chair of the Shipbuilding Committee.

“SA shipbuilders have enough expertise and runs on the board to entitle them to put their hat in the ring in an open tender process for the construction of Australia’s new submarine fleet,” he said.

Independent expert Dr John White, co-author of the Government’s key shipbuilding report which is still secret, was among the chorus of calls for a competitive tender on the submarines.

He remains wary that Japan has never shared or exported its sub technology.

“Defence Minister Johnston’s reasoning that Australia can’t build the two new supply ships and that Japan and European builders have the front running for the subs has been repeatedly hit, then sunk,” he said.

“Australian industry should have the right to tender and build Australian ships and submarines in Australia.

“Tony Abbott and David Johnson are now isolated. Their own industry experts and Senators know there’s a need for a long-term, rolling build of ships and they know we have the skills to do it.”

Defence South Australia research showed off-the-shelf submarines from Japan – or other nations – would suck $29 billion out of the economy. A local build would put $20 billion into supporting thousands of local jobs.

Some of the strongest evidence came from AMWU shipbuilding members including Andy Sudoltz, Brett Smith and Chris Stanborough in Adelaide, Leon White and David Vicker in Melbourne, and Ben Horan, Jeremy Knight and Brad Pidgeon in Newcastle. 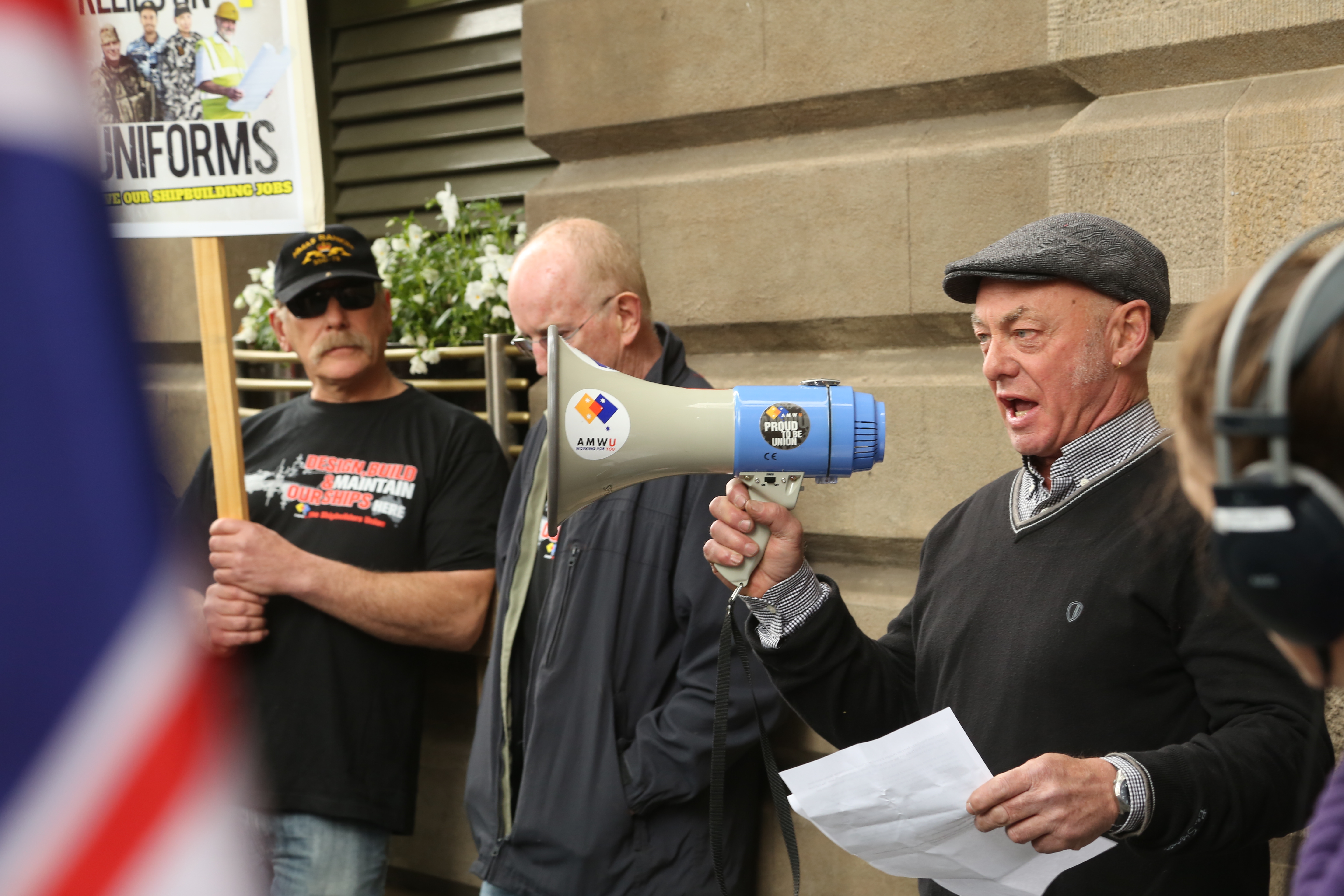 Leon White said there were numerous families relying on wages from BAE’s Williamstown shipyard, including both partners, so no more work beyond 2015 would devastate the community.

Mr Sudoltz and Mr Stanborough both agreed productivity at ASC in Adelaide would meet benchmarks as the AWD project progressed and to lose the advanced skills of the local workforce by a foreign sub buy would cost Australia jobs and it’s ability to defend itself.

Mr Sudoltz, a mechanical fitter on both subs and AWDs, said Australia would be totally vulnerable if it allowed an overseas nation to own the base technology of its submarines.

“You need to be self-reliant in a changing world, not relying on a distant nation for technology or the parts in a potential time of trouble,” said Mr Sudoltz, a mechanical fitter on subs and AWDs.

Pipefitter Chris Stanborough, who worked in Japanese shipbuilding for eight years, warned the committee on the steep long-term cost rather than short-term savings from a foreign sub design.

The guarded Japanese attitude on defence technology, plus the extreme translation complexities, could make building and servicing subs a huge, costly headache.