Despite hopes, the Abbott Government’s Budget gave nothing to defence shipbuilding

Instead, just hours before Joe Hockey handed down the Budget, BAE Systems announced workforce cuts at the Williamstown Dockyard. It’s a kick in the face from a Budget titled “Jobs, Growth and Opportunity”.

BAE said the lack of any new government orders caused  its latest job scale down, despite the company publicly stating ‘we want to build navy ships here in Australia.’

By early next month 80 skilled trades jobs, 20 office jobs and 50 trades contractors will be gone.

Members’ fears that the remaining 800 jobs at the yard will be lost by the end of the year were echoed by management in a media release.

AMWU National Secretary Glenn Thompson described it as “soul destroying” for the BAE shipyard workers, their community and the entire navy shipbuilding industry. 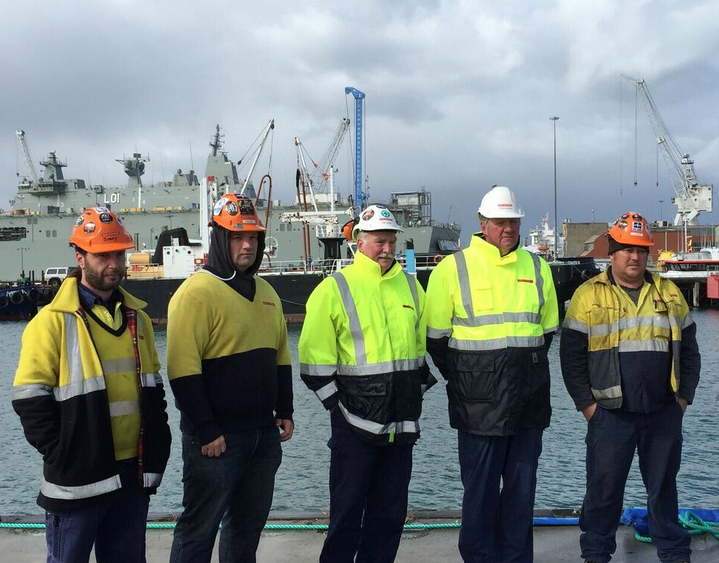 “We’re shattered that the Federal Government has failed to allocate any money in their Budget for this vital, nation-building industry,” Mr Thompson said.

“With the job losses at Newcastle last month and now this, the industry stands on the tipping point of no return.”

The Budget failed to allocate spending on options including a fourth Air Warfare Destroyer and the Government has dragged its feet on awarding contracts for 21 patrol boats, which could help sustain BAE and Forgacs in Newcastle over the short term.

AMWU delegate Leon White has seen the Williamstown workforce decline from 1300 to 800 as the final months of work are completed on the navy’s second Landing Helicopter Dock ship.

Workers have dubbed it “the Titanic.”

“The only thing that can save the yard now would be a fourth AWD, if we could get the steel we could start making those parts tomorrow because we’re already working on blocks,” he said.

“The company has put the case to the Government but we’re looking at skills going out the gate for skilled colleagues who will now be competing for work in a dwindling market.”