The AMWU has won the support of crossbench Senators to stop the Abbott Government slashing the FEGS scheme.

FEGS - the Fair Entitlements Guarantee Scheme - is legislation that ensures that companies must pay out the entitlements of workers abandoned by employers who go bust.

A joint delegation  with the Textile Clothing and Footwear Union successfully secured the backing of the Palmer United Party plus independents  John Madigan and Ricky Muir to block the Budget changes aimed at stripping back workers’ redundancy payouts. 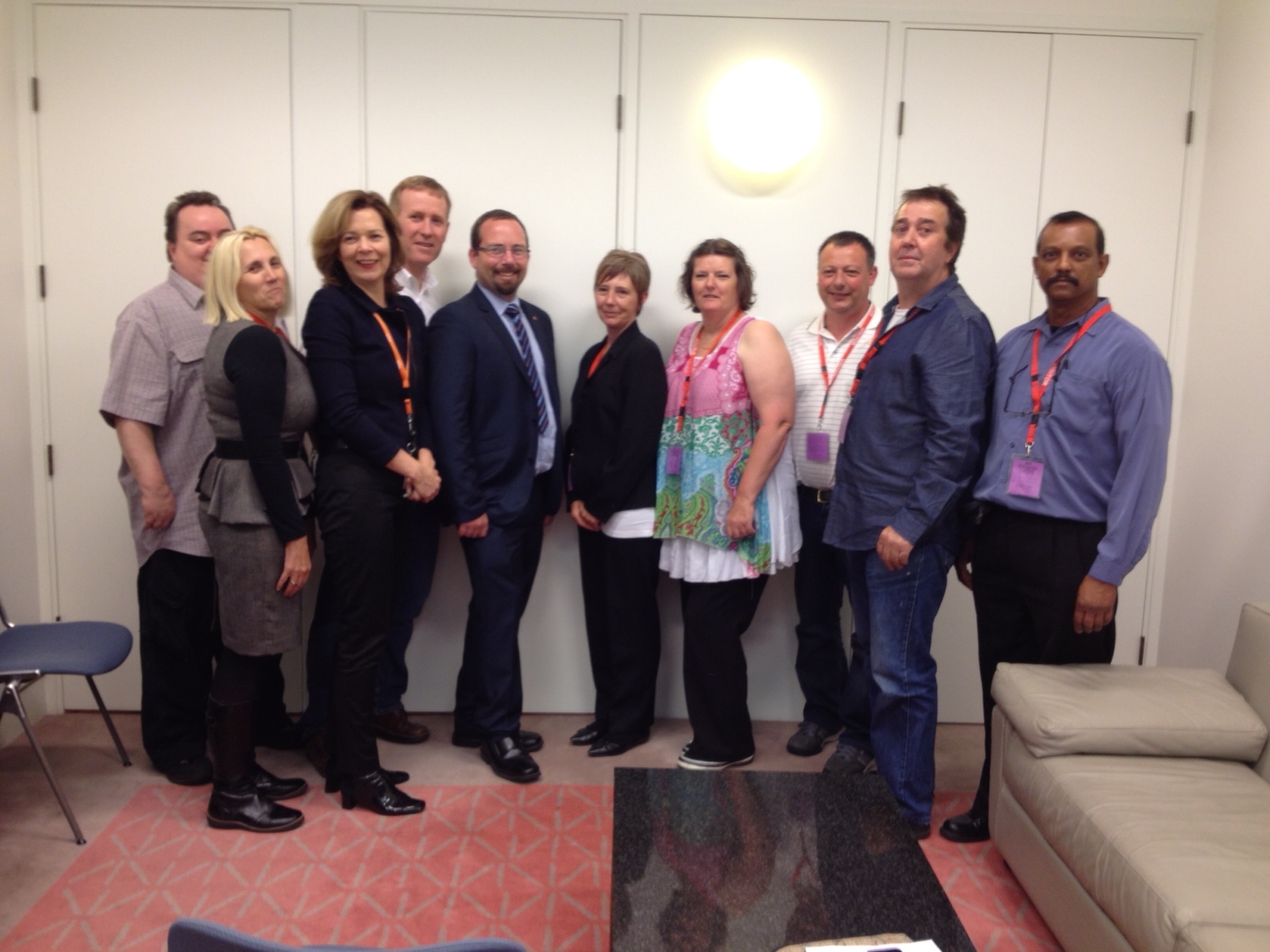 Up to speed: Independent Senator Ricky Muir (centre) gave his support after meeting unionists. AMWU Vic secretary Steve Dargavel is to the left of the Senator.

They included ex-employees of Bruck Textiles in Victoria, which went broke this year owing employees their entitlements, and former  Albury-Wodonga firm Paragon Printing, which had over 100 AMWU members when it became insolvent in 2010 and its owner fled overseas.

The  Abbott Government promised not to touch the FEGS safety net but now it wants to save money by slashing uncapped redundancy payments  to just 16 weeks, which would hit hardest those loyal workers with decades of service.

Senators Madigan and Muir told the delegation that as working people they had known the burdens of being left jobless and would vote against  the legislation changing FEGS.

Palmer United Party leader Clive Palmer and Senators Glenn Lazarus,  Zio Wang and Jacqui Lambie formally decided to oppose the change the day after our group spoke to the party.

“Senators were open to our message that  this vicious move would hit the most vulnerable workers, suddenly out of work through no fault of their own, betrayed by employers who owe them many thousands of dollars from years of work,” Mr Dargavel said.

“The Labor Party and Greens oppose these FEGS changes and with our efforts in Canberra , we have gone a long way to ensuring the defeat of the legislation in the Senate.”

The delegation also met with the Greens and the architect of the changes,  Industrial Relations Minister Senator Eric Abetz, who claimed the scheme had become too expensive.

The Fair Entitlements Guarantee Scheme provides up to 13 weeks unpaid wages, annual leave, holiday leave, superannuation – and redundancy based on years of service.

This involves  using corporations law to avoid paying debts and worker entitlements by suddenly declaring a company insolvent and unable to pay creditors, then immediately re-opening under another name, often at the same location.