Save Our Jobs - Shipbuilders Rally in Adelaide

More than 1500 workers walked off the job on Tuesday at ASC in Adelaide to attend a mass meeting on the future of their jobs and the Australian shipbuilding industry. They were joined by AMWU National Secretary Paul Bastian and Labor Opposition Leader Bill Shorten.

AMWU members were joined by National Secretary Paul Bastian, who vowed to keep up the intense pressure on the Coalition Government, as they toy with the purchase of twelve Japanese submarines.

“A year ago David Johnston stood here and promised to build 12 subs right here in Adelaide. Today, the papers read we are likely to see Japanese submarines – Do you feel betrayed?” Mr Bastian asked the crowd.

ASC worker and AMWU delegate, Glenn Dallimore said he felt betrayed by the Coalition Government’s lack of commitment, “this is an incredibly risky proposition to our sovereign capability into the future.” 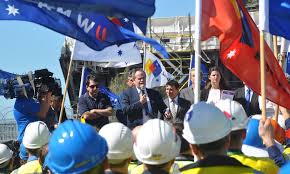