The AMWU is putting it’s best foot forward for safety and local content by demanding that the futuristic $54 million footbridge for the new Perth Stadium be fabricated in Australia.

WA State Secretary Steve McCartney said all materials to be used on and around the new AFL stadium should have local content maximised, including the major 400-metre footbridge across the Swan River.

He spoke in light of safety concerns over the strength and quality of  bridges fabricated overseas for the nearby regional centre of Bussleton – all had to be re-worked locally.

The WA Liberal Government has again dodged any back up for local jobs and industry, with Transport Minister Dean Nalder refusing to give any guarantee in Parliament that the stadium bridge will be fabricated locally.

The controversy arises after three bridges fabricated in China for Busselton were singled out for criticism by the Australian Steel Institute, which called them “cheap and unsafe.” 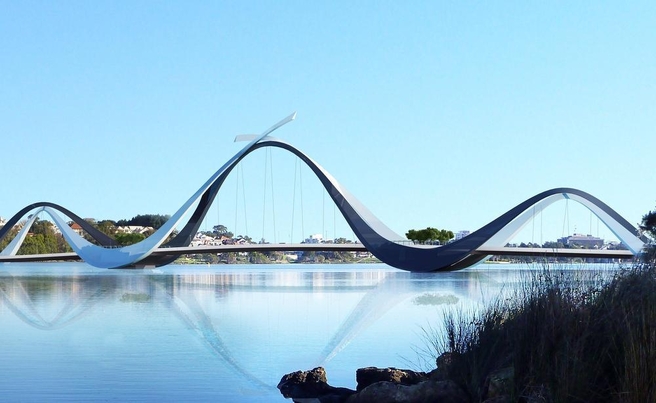 Future footy walkway: local workmanship means safety but the Barnett Government will give no guarantees the new stadium footbridge won't be fabricated offshore.

The expert body criticised the design, welding and general standard of workmanship on the three bridges, which later had to be rectified in WA by local workers.

It is the latest example where a lowest-price overseas fabrication bid ended up costing taxpayers extra because of rectification work later.

Mr McCartney said it was a familiar story in the mining-construction sectors.

With unemployment rising among skilled metalworkers as the resources construction winds down, it made better economic sense overall if infrastructure were fabricated and assembled locally.

“There can’t be any doubts about the structural integrity and safety of the new pedestrian bridge crossing the Swan River to the Perth Stadium.

“With some 14,000 fans likely to cross the bridge on match days once the new stadium opens, it is critical that the bridge construction is of the highest quality and meets Australian Standards.”

AMWU member Lorne O’Loughlin, an experienced rigger, said the faulty bridges at Busselton would be unlikely to ever carry sufficient people at one time to test their maximum loading, but it was a different story for the stadium bridge to East Perth-Burswood.

“That bridge will have near maximum load every week with big crowds using it, if a weld is not up to scratch there’s potential for disaster,” said the AMWU State Councillor.