Hundreds of shipbuilders, their families and community supporters joined rallies in Adelaide and Perth today to urge the Coalition Government to build locally as the industry continues to shed jobs.

The AMWU members, supported by other unionists, marched through central Adelaide to the office of federal Industry Minister Christopher Pyne to keep the pressure on the Government as it considers competing bids for the $50 billion submarine contract .

The rallies came after BAE Systems in Melbourne announced another 200 job losses at its Williamstown shipbuilding yard, with a further 150 likely to go after Christmas. 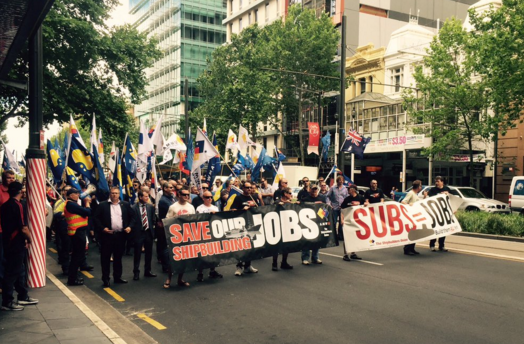 Demand for new orders: the Adelaide rally urged the Federal Government to bring forward key navy contracts before the Valley of Death gutted the industry Australia-wide.

AMWU National Assistant Secretary Glenn Thompson said it wasn’t good enough for the Turnbull Government to promise it would move to a continuous shipbuilding strategy sometime in the future and then stand by while shipyards faced closure and jobs were lost.

“These job losses could have been prevented if the Coalition Government had brought forward construction of the Pacific Patrol boats and two new supply ships for the Navy,” he said.

“These same workers who will now be losing their jobs have recently completed two Landing Helicopter Docks (LHDs) for the Navy and the construction of hull blocks for the Air Warfare Destroyer project so there’s no question about their capabilities."

He was speaking after joining the Adelaide rally, where speakers also demanded certainty for South Australia by the Federal Government committing to build  12 submarines locally, as it originally promised. 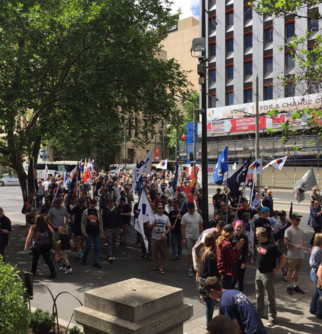 German, French and Japanese syndicates are in the running for the sub contract but there is speculation the number could be cut to eight when the Government unveils its upcoming Defence White Paper.

“The Coalition promised to build 12 submarines at ASC in Adelaide. Voters and workers expect the Government to honour that election promise in order to boost the Australian economy and protect our national security,” Mr Thompson said.

Today’s rally in Perth marched on the office of federal Minister for Employment, Michaelia Cash to deliver the same message.

The rallies follow a fortnight where shipbuilding AMWU delegates lobbied politicians in Canberra and the union unveiled three billboards in busy parts of Adelaide.

They carry the Subs Equals Jobs reminder to locals. One was crowd-funded as the AMWU raised $6000 on social media.

Parliament Christmas message (below): Labor frontbencher Senator Penny Wong (left) and other MPs join AMWU members as they display their banner in the halls of the federal Parliament House in Canberra this week. 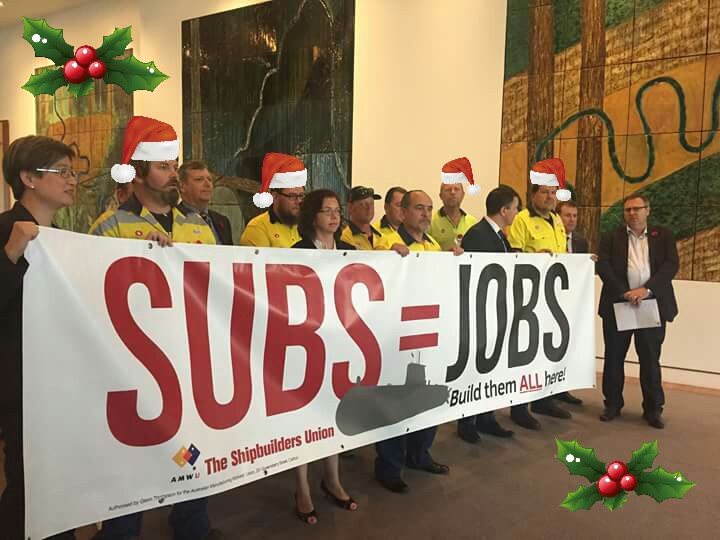