The union movement is swinging behind 54 sacked brewery maintenance workers who have held the first of our weekly protests outside CUB’s Melbourne corporate headquarters.

Supporters from many unions stood with AMWU and ETU members in driving winter rain to warn bosses that shortages of VB, Pure Blonde and other beers would  ruin their peak footy finals market  unless the workers were reinstated with their conditions and pay intact.

And we're inviting unionists to join us every Thursday at 12 noon outside CUB at 77 Southbank Boulevard to publicly shame the company.

AMWU State Secretary Steve Dargavel, Assistant Secretary Craig Kelly and ETU Secretary Troy Gray went into the CUB foyer to tell a company executive that we won't be going away until it abandons its strategy to slash wages by up to 65 per cent.

“This is the way some of our members with 30 years service are rewarded by CUB, it’s a despicable act,” Mr Kelly told the rally, encouraging AMWU members to give to the workers fighting fund (*details at story's end).

Mr Gray said: “This will be a war of attrition and we will win it.”

Send a message of support to these sacked workers HERE. 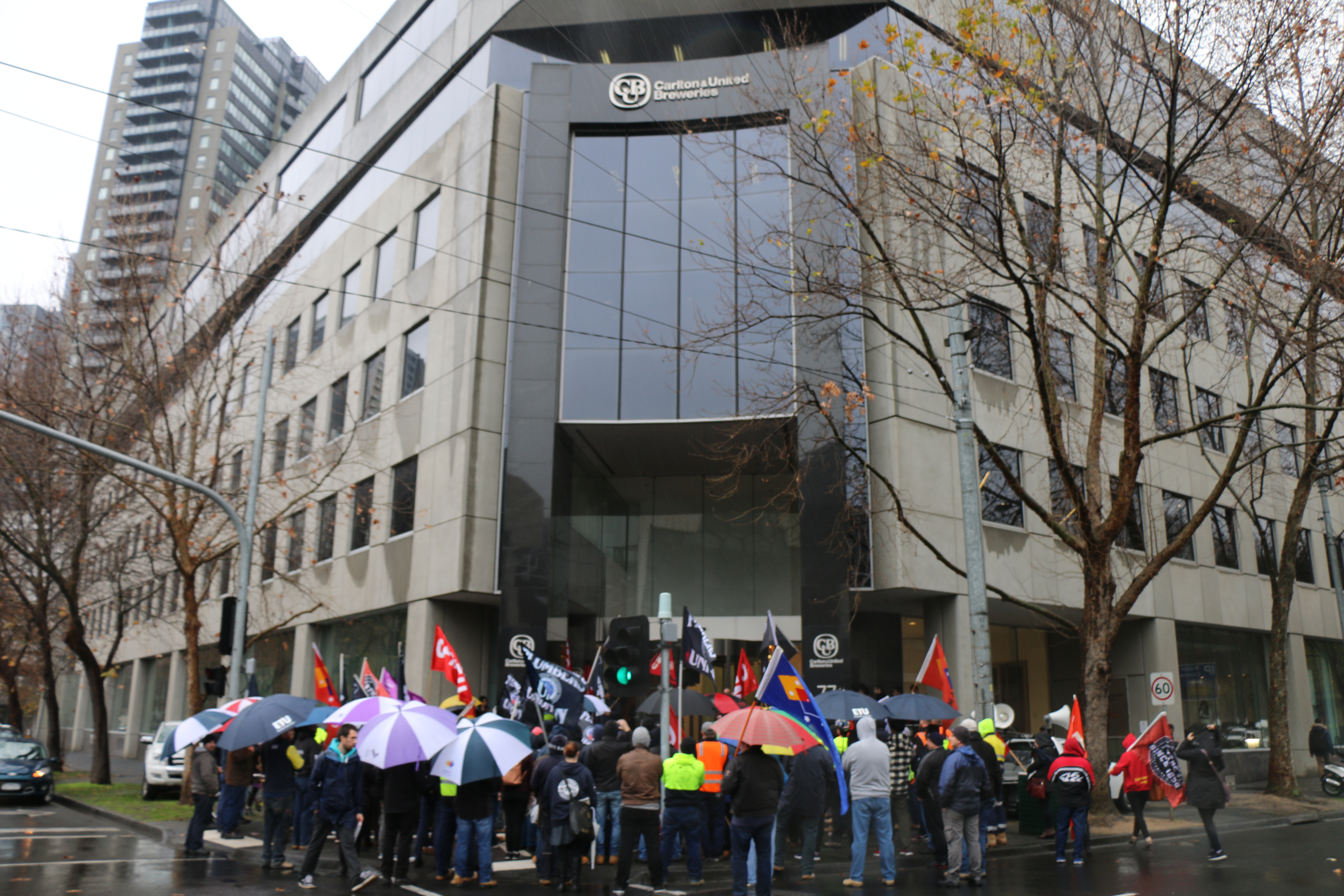 Braving the elements: unionists are supporting CUB sacked workers with rallies every week outside the corporate HQ at Southbank, Melbourne.

Unionist Chris Brown told AMWU News: “This could happen to any union member, it’s why we have to stay strong because some companies have no respect for their tradesmen.”

This infamous non-union operator offered the fitters and electricians their jobs back with a 65% pay cut.

However, the decision by CUB is disrupting production with the stores of packaged beer for retail outlets rapidly dwindling as production dries up by half.

The maintenance fitters and electricians have a camp outside the Abbotsford brewery in S Audley St, where they will also be holding a solidarity brekky barbecue to kick off the protesting week every Monday from 6am onwards. The AMWU and ETU are also using social media to tell consumers of CUB’s biggest brands about the dispute.

“If CUB get away with this, it wouldn’t be good for anyone,” he said.

“Manufacturing is already in a rough spot and the last thing we need are employers sacking people to wind back conditions won over many decades.”

Winter campaign (below): AMWU Assistant State Secretary Craig Kelly (right) with some of our CUB members and activists, who want the jobs back with fair pay. Other pic: Mr Kelly addresses the rally. 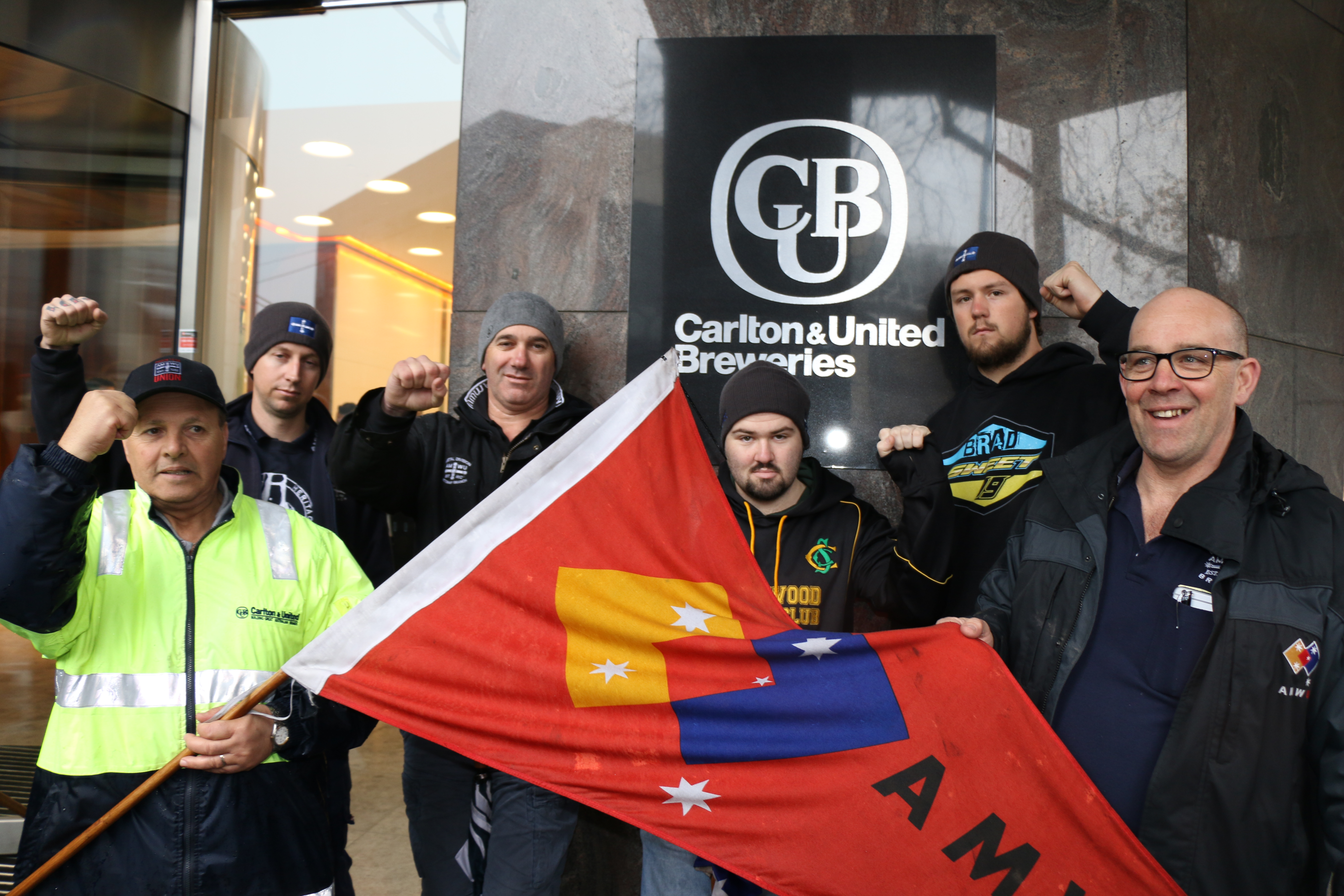 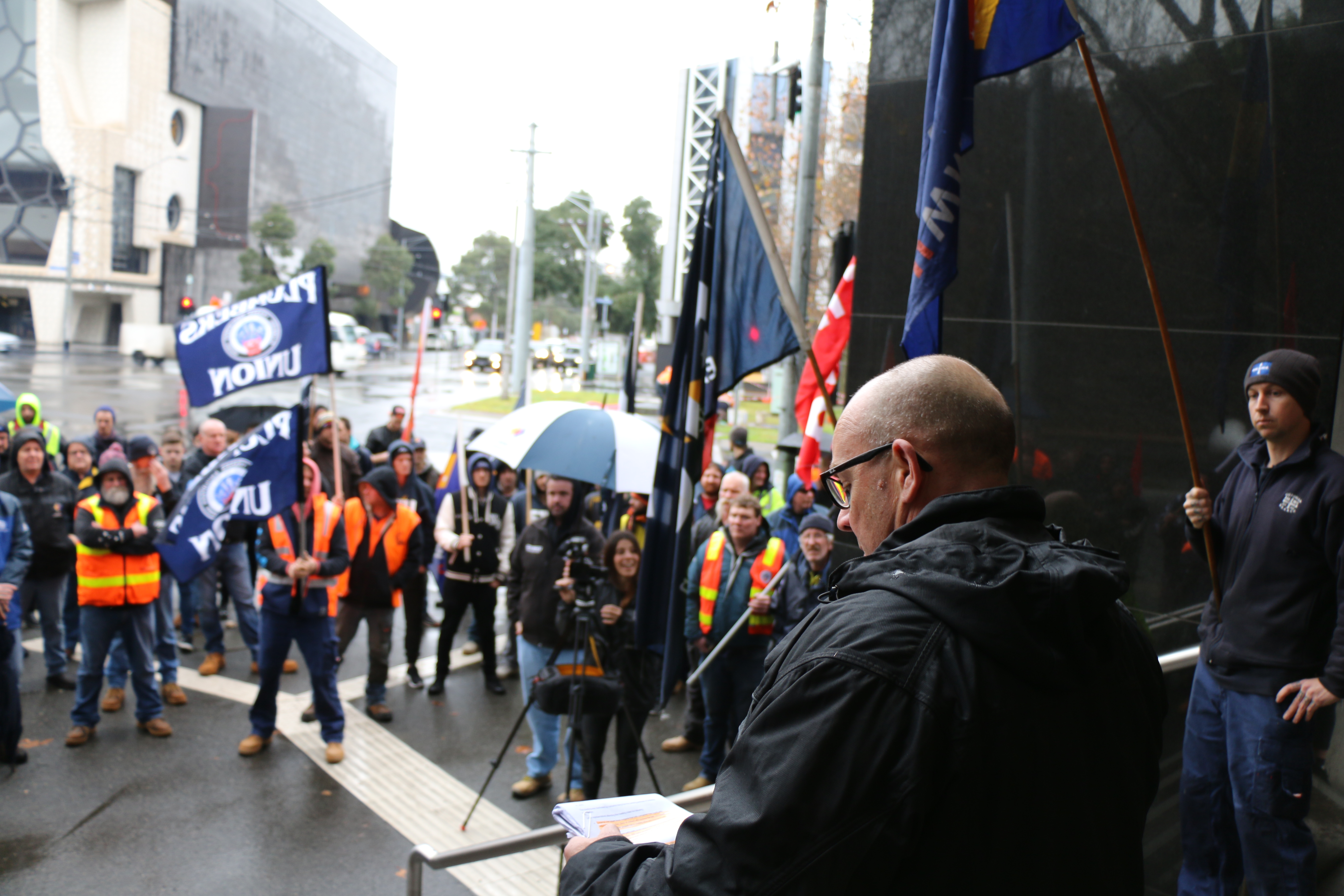