The launch of the recently formed group the ‘Parliamentary Friends of Australian Books and Writers’ was held at Parliament House in Canberra last week. Distinguished guests included popular Australian authors and political heavyweights from both sides, including Opposition Leader Bill Shorten, Shadow Foreign Minister Tania Plibersek, and Government MPs Kevin Andrews and Tony Abbott all came to show their support for Australia’s most successful creative industry.

The group, headed up by Coalition Senator Linda Reynolds and Labor MP Graham Perrett aims to provide a forum for Parliamentary Members and Senators to discuss important issues affecting the publishing industry on matters relating to the work of writers, printers, publishers and the industry as a whole.

The AMWU as part of the Back Aussie Books campaign and the Books Create Jobs partnership supported the launch with a view to promoting the thriving printing and publishing industry that employs hundreds of print workers around the country, including McPhearsons in Victoria, down to Griffin Press in Adelaide and across to Legare in Sydney.

The AMWU has been working closely with members who work in the printing industry on protecting current Parallel Import Restrictions (PIRs). PIRs are a part of our copyright law and prohibit bulk imports of books for resale where an Australian publisher who has acquired exclusive rights and publishes the title within 30 days of original overseas publication.

One of the guest speakers at the event was internationally acclaimed author, Thomas Keneally. Mr Keneally addressed the group on the issue of Parallel Import Restrictions. He spoke passionately about the devastation the removal of these protections had wreaked on the New Zealand printing and publishing industry. Mr Keneally highlighted the fact that rather than encourage competition as the Productivity Commission report claims, removing the PIRs had in fact caused massive collapse throughout the industry, as well seeing the volume of books and particularly the range of books by New Zealand authors dramatically reduced.

The AMWU will continue to lobby the Federal Government to ensure any plans to flood the Australian market with cheap imported books are stopped and will fight to ensure jobs in the Australian print and packaging industry remain vibrant and secure.

If you want to show your support you can sign our petition to back Aussie books here, ask family and friends to show their support too. 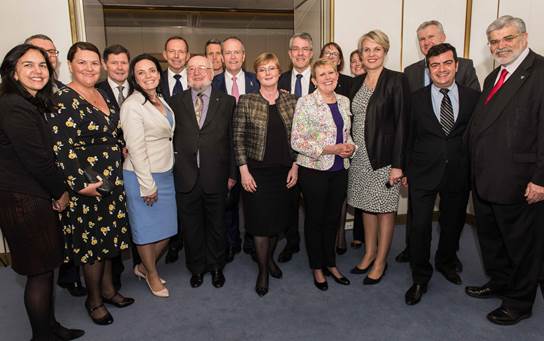