The AMWU has welcomed Labor’s comprehensive skills and training strategy to boost apprentice recruitment and encourage employers to take on workers most affected by the shake-up to manufacturing industry.

The centerpiece of Labor’s policy is to put $285 million into reviving the popular Tools for Your Trade initiative  which was axed by the Coalition in 2014.

When added to guaranteed funds for TAFE and a $10 million a year boost for Group Training Companies to assist employers hire new apprentices, Labor would help claw back the devastating decline in apprentice numbers under the Coalition.

Apprenticeships and traineeship numbers have fallen 40 per cent in the past four years, a drop of 122,000 places.

“The AMWU has persistently pushed for the political parties to meet our national skills crisis and only one side has listened,” said AMWU President, Andrew Dettmer.

“More young apprentices than ever are dropping out because the financial pressure from very low wages is just too much, with the Coalition’s Trade Support Loans worsening this by throwing  thousands of them deeply into debt.

“Tools for Your Trade can mean all the difference between having to drop out and emerging with a trade qualification.”

The Tools for Your Trade program builds on Labor’s election pledge to create 2600 new jobs for apprentices by setting aside one in every ten positions on new Federal Government infrastructure projects. 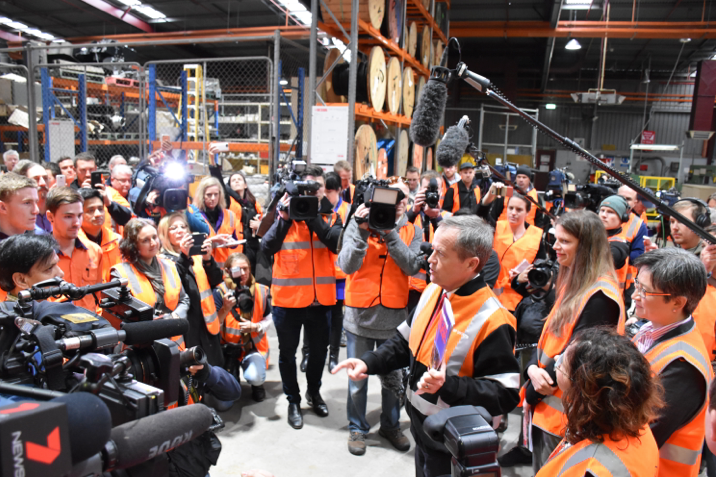 Reaching out to workers: Opposition Leader Bill Shorten visited an Adelaide rail site to outline his plans for a better future for workers in protecting penalty rates, Medicare and boosting apprentice numbers and rights.

The AMWU has also succeeded in persuading labor to appoint a national Apprentice  Advocate, to  guarantee apprentices  get the right entitlements and are better protected from bullying.

This contrasted with the Coalition “PaTH” solution to offer young, unemployed people internships on wages of $4 an hour.

An extra 5000 places will be created under a pilot program to help retrenched workers return to the workforce by formal Skills Recognition through matching their skills to relevant traineeships, apprenticeships or emerging occupations.

“As manufacturing transitions out of car making, Labor is the only party to come up with a viable, multi-pronged plan to ease the way into new jobs for thousands of workers facing displacement,” Mr  Dettmer said.

“It relies on restoring the place of TAFE as the prime provider of quality training for both mature workers and apprentices within the training system, which the Coalition has stripped of funds.”

Mr Dettmer said the AMWU would like to see both major parties commit to TAFE getting a guaranteed 70 per cent of the national training budget, the best way it could recover from years of savage cuts by the Coalition at state and federal level.