Alcoa executives overseeing ruthless cost-cutting had a shock last week when their early morning routine was disrupted by nearly 200 unionists outside the glitzy WA head office giving them a loud reminder on wage justice.

AMWU WA State Secretary Steve McCartney took to the Alcoa front steps, blasting it for wanting its workforce to pay for a 20 per cent cut in operating costs by trying to take a huge chunk out of their wages and conditions.

That’s despite the company looking at its best alumina profitability since 2007.

Our members, some with family, were joined by other unionists in the Perth suburb of Booragoon to protest against Alcoa’s race to the bottom in labour hire contracting, which is squeezing family budgets and compromising safety at its sites.

Maintenance contractors including Transfield, ALS and United Contractors who service Alcoa’s five WA sites have told their workforces they expect a wage cut of at least 10 per cent to remain competitive to meet the aluminium producer’s cost cutting demands.

Alcoa management itself has taken an aggressive stand in early bargaining talks for its own workforce, including 600 AMWU members across its three smelters and two mines in outlying areas from Perth.

“Our members have worked for years, many for decades, to make Alcoa's South-West operations the most profitable in the entire world,” Mr McCartney said.

“Alcoa has made billions of dollars in profit over many years. They are still making huge returns right now but they are effectively trying to slice 20 per cent off what our members earn and we won’t stand for it.” 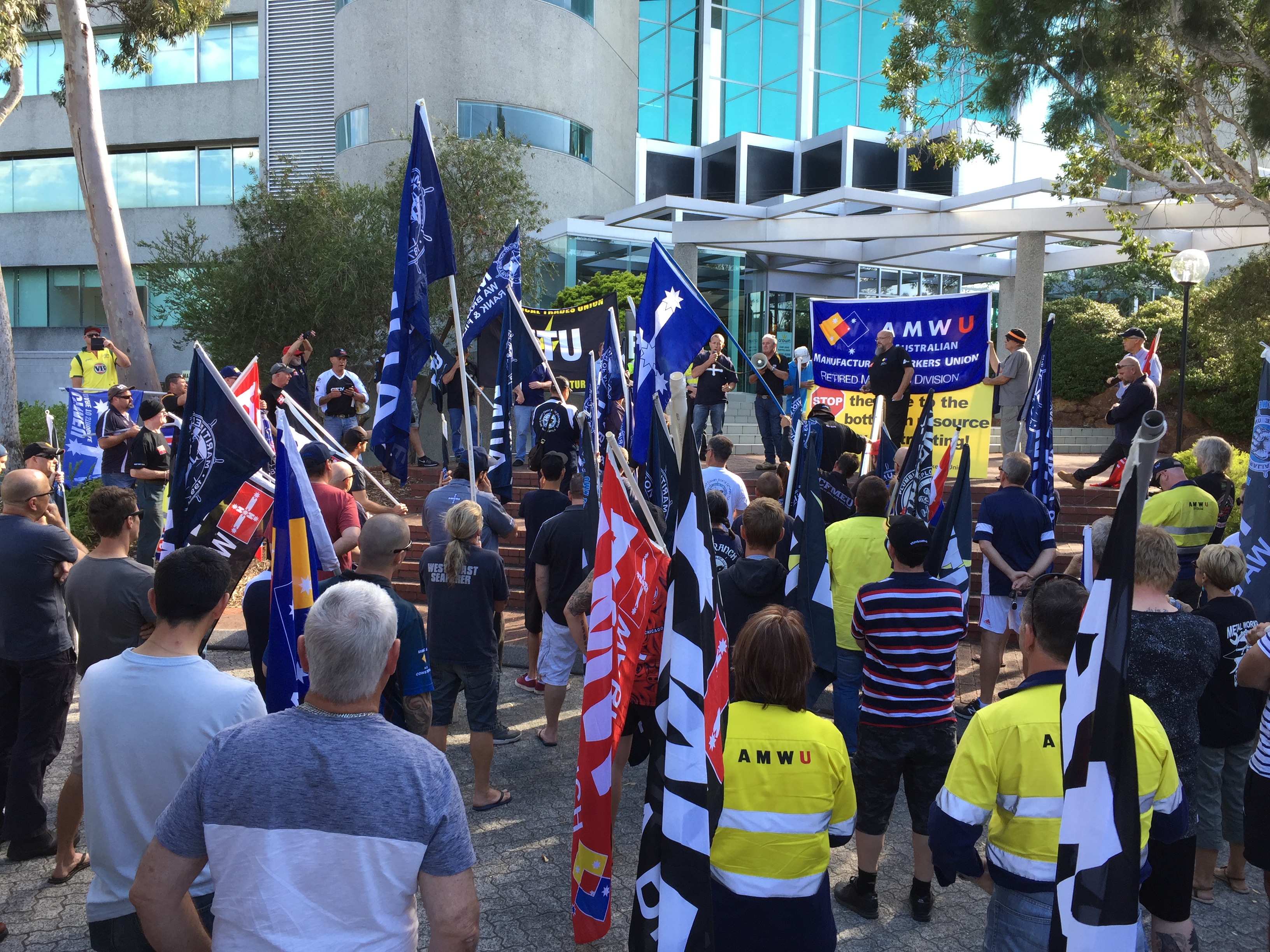 AMWU organiser Simon Rushworth said a key concern was Alcoa opening its maintenance contracts to new labour hire bidders, which were willing to strip back wages to the award base.

He said Alcoa’s end game was a race to the bottom on wages for contract workers to put extra pressure on its own permanent workforce.

Members were also concerned at the impact of rock-bottom maintenance deals on safety, particularly after this year’s asbestos scare at its Kwinana refinery.

This would impact on all the company’s five sites in WA, smelters and bauxite mines.

The AMWU’s concerns over Alcoa are mirrored in the company’s move to sack 40 Australian seafarers and sell its ship the MV Portland, which transports aluminium product between WA and Victoria.

Alcoa wants to cut costs by instead using a flag-of-convenience ship on this domestic route, manned by foreign seafarers on as little as $2.50 per hour. That’s made possible by changes introduced by the Turnbull Government.

Its crew have refused to sail it to Singapore for sale, which would make them redundant, and their union (the MUA) is contesting the company's demands in the Fair Work Commission the the Federal Court.

The AMWU is supporting a Maritime Union petition  and other efforts to offer the seafarers assistance, backing a community protest where the ship is tied up in its home port at Portland in Victoria.

Our members at Alcoa in Portland will consider further help at a joint unions meeting next Tuesday.

All on board (below): The AMWU is among unions supporting MUA seafarers on the Alcoa-owned ship MV Portland, who are fighting for their jobs and decency in wage rates. 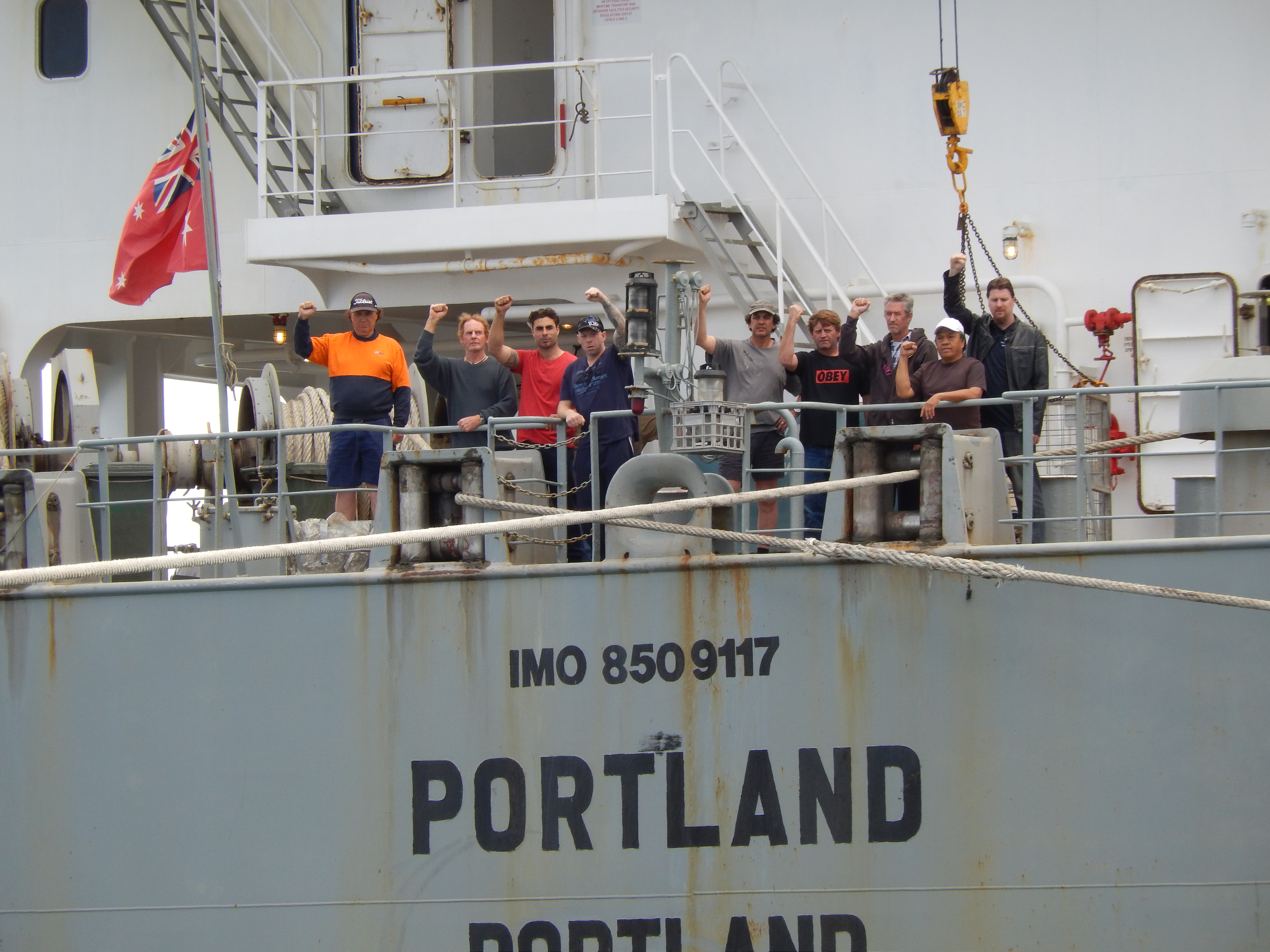