The Australian Manufacturing Workers’ Union (AMWU) is extremely concerned about the mental health of Griffin workers’ in the aftermath of the unprecedented Fair Work Commission decision to cancel the Griffin Coal Maintenance Enterprise Agreement, and hand Lanco the power to reduce maintenance workers pay by 43 percent.

The Australian Manufacturing Workers’ Union (AMWU) is extremely concerned about the mental health of Griffin workers’ in the aftermath of the unprecedented Fair Work Commission decision to cancel the Griffin Coal Maintenance Enterprise Agreement, and hand Lanco the power to reduce maintenance workers pay by 43 percent.

“Lanco Griffin has waged a war of attrition upon the Collie community and like all wars this one is taking a heavy toll on mental health,” AMWU WA State Secretary Steve McCartney said.

“This dispute has never been about the money, it’s about protecting a community. It’s about ensuring kids’ sport has coaches on weekends, that the local fire brigade has volunteers and that families can be together as much as is reasonably possible.”

So far Lanco has insisted that workers:

“Our members have bargained in absolute good faith, and met them in the middle.

“Our members built their lives around the commitments the company gave them, and they have been badly let down.”

With Collie property prices falling because of the decision, Mr McCartney said some members confided they felt “trapped” because they could not afford to move. 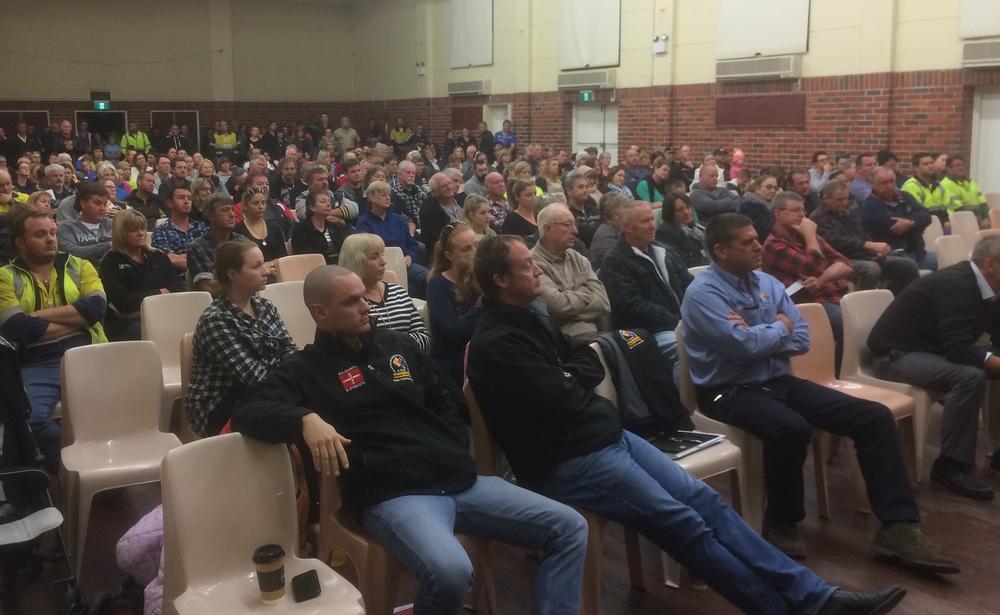 The Collie Miners' Institute was packed with concerned workers, families and community members in June this year

“To have their good will thrown back in their faces from a company that doesn’t understand the community has taken a massive toll on our members and their families mental health.”

“Families can’t just pick up and leave when they’ve got mortgages to pay and kids in the local schools.”

Mr McCartney repeated his claim that Griffin Coal under the administration of foreign multinational Lanco was one of the worst managed companies he had ever dealt with.

“They’ve claimed in the past they don’t even have money to pay our members’ superannuation or bills for local suppliers but somehow they always find the money to keep racking up legal fees to bully our members.

“They were forced to pay out $7.5million to another company for absolutely nothing because they messed up a coal supply contract. That’s many times what they are trying to squeeze out of families’ pockets.

“It doesn’t have to be this way. As always, we are ready to negotiate in good faith but we will never accept that local families have to pay for Lanco’s atrocious management.”

AMWU Care is a telephone counselling, supported referral and information service for union members and their families available 24/7 on 1800 206 316.