Job creation under Victoria’s Napthine Government looks to have suffered another blow with a local Ballarat train manufacturer cut out of the tender for 25 of the state’s new passenger trains.

Alstom was told its bid to outfit the new trains at its Ballarat workshops was unsuccessful, despite its potential to create 25 new jobs on site and over 100 among parts suppliers Australia-wide.

AMWU members at the site are bitterly disappointed, as the trains worth $376 million are likely to be imported and largely outfitted by competing tenderers China North Rail or Korea’s Rotem. 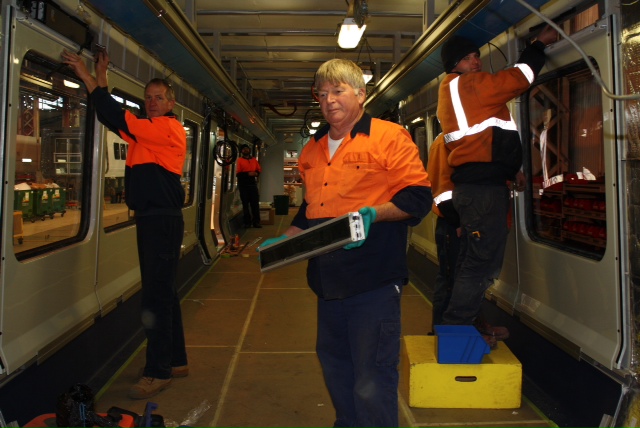 The decision was made by the Napthine Government’s nominated private consortium for the $2.8 billion Cranbourne-Pakenham rail line upgrade, which is a Public Private Partnership

AMWU Victorian State Secretary Steve Dargavel said it was a disgrace that while manufacturing jobs were in crisis in Victoria, the Napthine Government was handing decisions on Victoria’s rail manufacturing to a foreign-dominated private consortium.

He vowed the AMWU will be putting intense pressure on both the Coalition and Labor to make a specific local content commitment prior to the November state election.

“The State Government can get good employment results and value for money by building locally. It is totally inadequate to contract out your community responsibility and allow the private sector to make procurement decisions in secret,” he said.

“There is almost no emphasis on local content, this is a Hong Kong-dominated consortium which prefers its usual rail suppliers in China and Korea.”

Victoria’s only other train manufacturer, Bombadier at Dandenong, did not bid and instead will be a sub-contractor to China North Rail to try and get it over the line on Victoria’s 30 per cent local content rule.

But Mr Dargavel said he had no confidence in the secret tender process to give meaningful local content.

“It’s a bad omen for what a Coalition Government might do about the 600 train cars needed over the next decade.”

Alstom workers learned the bad news on the day before Premier Denis Napthine visited to inspect the latest batch of X’Trapolis models for Melbourne’s suburban network.

After these eight are completed in 2015 Alstom has no further work for its Ballarat shop.

“It was a pretty sad visit for us, it was like ‘bad luck boys, better luck next time’ from Napthine,” said AMWU member Lucas Ellingham.

“We can’t understand it, the last group of trains we delivered were on budget and well ahead of schedule, so why wasn’t the company given a look-in on these new trains?”