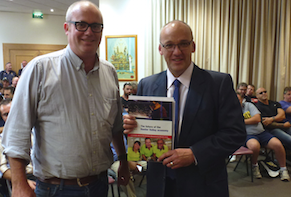 “Baird might have a nice smile, but scratch the surface and he stands for the same thing as Campbell Newman in Queensland and Prime Minister Tony Abbott,” Mr Foley told delegates.

He said Premier Mike Baird could not boast of a good economy when the state’s second biggest city – Newcastle – had double-digit unemployment.

Under Labor, local firms who tender for government contracts would have a 20 per cent price preference to support them and their skilled workforces.

And 15 per cent of jobs on major government projects must be for apprentices or trainees. They now face soaring fees for TAFE colleges, which had lost 1000 teachers and funding under the Liberals.

Mr Foley called it “absurd” that 22 trains for Sydney’ North West Rail project were being built in India.

But Hunter rail shop delegates Shaun Goss and Brett Huybers both pressed Mr Foley for a specific commitment to new train building, as the Victorian Andrews Government have proceeded with.

Tim Ayres told Mr Foley: “We’ll work with you and industry on the things we know we can deliver, a high-quality, high-skilled industry solution.”

The NSW Government have stalled on the fate of 68 new Sydney trains, strongly indicating that over $2.8 billion in work would also be offshored.

Mr Ayres said members needed detail from Labor so the AMWU’s commitment to working for high-skill, high-productivity solutions with business could be implemented.

“The policy framework is right but so much is working on the detail together to deliver jobs,” he said.

“We have to work with industry to smooth out the price curve. We can’t have any more of this boom and bust cycle in rail, any more than we can have it in shipbuilding.”

Dozens of AMWU members have been campaigning in the vulnerable Liberal seats of Blue Mountains and Strathfield, asking voters to think about the devastating impact on local manufacturing jobs under the Baird Government.