IndustriALL Global Union continued its campaign to end the deadly asbestos trade in a meeting with a top official from the United Nations in Geneva, Switzerland on 10 April.

IndustriALL met Rolph Payet, the Executive Secretary of the Rotterdam Convention, a UN treaty that facilitates information exchange on hazardous chemicals on its list, and provides for a national decision-making process on their import and export.

At the meeting, IndustriALL expressed strong support for a proposal from a group of 12 African nations to amend Article 22 of the Rotterdam Convention, so that no single country could veto the listing of a dangerous substance on Annex III of the Convention.

It is IndustriALL’s goal to achieve a global ban on asbestos. We lose hundreds of thousands of workers to asbestos every year. We see this proposal to amend the Rotterdam Convention as a real opportunity and we are here to express our wish that it is passed.

The proposal seeks to change the decision-making process so that a dangerous substance could be listed with 75 per cent majority support from voting parties.

Chrysotile asbestos has been repeatedly blocked from the list by countries with financial interests in the asbestos trade, despite it meeting all the scientific criteria for it to be recommended for listing, and having overwhelming support for listing from a majority of parties to the Convention.  Two million tonnes of chrysotile asbestos is still mined and sold every year, mostly to the developing world.

“It is the health and safety of workers versus the interests and profits of big groups. It is our mission to do everything in our power to change the situation,” said Özkan.

Payet emphasized that the Rotterdam Convention does not aim to ban the use or trade of chemicals listed in Annex III, but offers a regulatory framework for countries to decide, for such chemicals, whether they wish to restrict, and to what extent, their future import. Such decisions taken by individual countries trigger the “prior informed consent” procedure embedded in the Convention and require adequate disclosure of a material’s hazardous properties. These decisions are then communicated to all Parties and must be respected.

The Chrysotile Institute (formerly named the Asbestos Institute), a lobby group for the asbestos industry, has cited the repeated failure of the Rotterdam Convention to list chrysotile asbestos as being somehow proof that it can be used safely.

Payet said that the decision to amend Article 22 is in the hands of the parties to the Convention and will be discussed when they meet in Geneva, Switzerland from 24 April to 5 May.

Concern has been expressed that a change to the current method of decision-making could derail the whole Convention.  However, Brian Kohler, IndustriALL’s director for health, safety and sustainability, who also attended the meeting, questioned:

The Convention is dysfunctional now, what is there to break?

IndustriALL has called on its affiliates to write to their governments supporting the proposal and is lobbying decision-makers to support the amendment of Article 22. 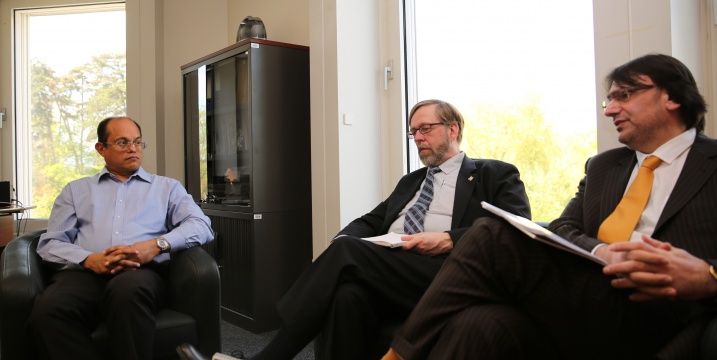 Rolph Payet, Executive Secretary of the Rotterdam Convention (left), met with Brian Kohler and Kemal Özkan from IndustriALL on 10 April.