AMWU National Print Secretary Lorraine Cassin is predicting a bright future for the print and packaging industry as she encouraged an enthusiastic group of talented apprentices brought together this week by FuturePrint.

The national Apprentices Forum gave 20 young people recruited through the FuturePrint program the opportunity to hear about both the workplace positives and areas needing improvement in competency- based training new to the industry.

Each brought the fresh perspective of apprentices steadily progressing through the benchmarks of workplace and theoretic training at their own pace of learning rather than the past confines of the traditional four-year structure.

Some are on the cusp of completing their apprenticeships – and getting a full trades wage – in two years or less.

Ms Cassin told apprentices they had joined an industry that was strongly rebounding.

But the average age of print workers is 45, giving opportunity for young, energetic contributors.

“The print industry is a vibrant industry which will always be there, the apprentice system is integral to it and we want to protect that,” Ms Cassin told the forum in Melbourne.

The apprentices voiced excitement at new technological frontiers in lithography , digital printing and pre-press, which are expanding job opportunities beyond traditional print procedures.

A deep job satisfaction came from seeing the end results of their work in publications, in retail or on the street, plus learning of new skills transferrable interstate or overseas.

But a common problem was a failure among supervisors to embrace the more rapid competency-based model, some content to leave apprentices on repetitive tasks for long periods when they were eager to further learn and advance by taking on new tasks.

Some TAFE/RTO supervisors saw apprentices weekly or fortnightly but some apprentices said they would be lucky to have meaningful contact more than a few times a year – one had only ever communicated by occasional emails.

The Future Print program, a joint initiative between the AMWU and the peak employers group PIAA, has recruited about 220 new apprentices in the past 18 months and looks set to easily meet its target of 240 by year’s end when its’ $4.5 million in federal funding will end. 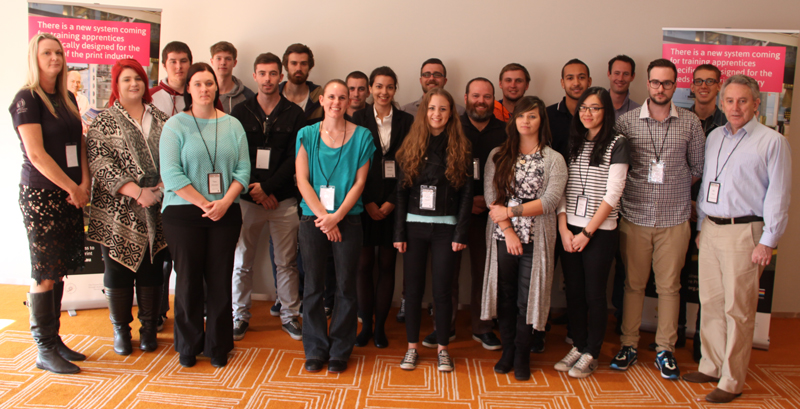 Great job: The AMWU`s Lorraine Cassin (left of shot) and PIAA chief Bill Healey (right) with apprentices at the Forum in Melbourne.