A determined delegation of Collie locals is back home in the South-West after two weeks on the road taking the story of the devastating Griffin-Lanco dispute to Federal MPs and Australian Council of Trade Unions’ (ACTU) leadership.

Mr McCartney said Ms Scoffern and Ms Beauglehole’s address regarding the uncertainty Lanco and the Fair Work Commission had created in Collie and the South-West by cancelling the maintenance agreement resonated strongly with the Executive.

“Despite hundreds of years’ collective involvement in the industrial arena, many senior union leaders were moved to tears by the story of Lanco’s contempt for our members and their families,” Mr McCartney said.

Mr McCartney said of particular concern to the ACTU leadership were the implications for every Australian workers who rely on Enterprise Agreements for financial certainty.

“We’ve said all along that the Fair Work Commission got this decision badly wrong, and that the unprecedented decision to cancel an enterprise agreement in this way would send shockwaves through our entire industrial bargaining system.”

“However I’m pleased to say our visit, especially Jane and Leonie’s powerful advocacy, has meant the Australian union movement understands how important this fight is for every Australian worker.”

The ACTU responded by moving this resolution of support for Griffin Lanco AMWU members and their families. 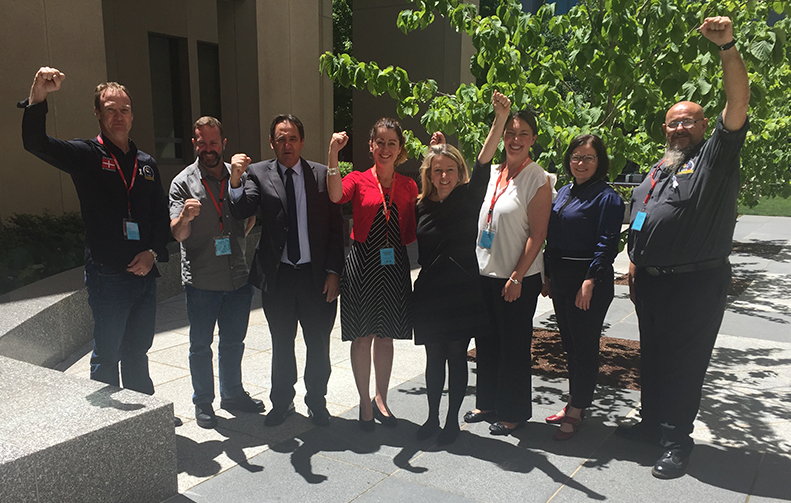 The following week the delegation was joined by Griffin AMWU member Paul Beauglehole to travel to Parliament House in Canberra to speak to Members of Parliament about the Griffin dispute, including WA Senator Louise Pratt, Shadow Industrial Relations Minister Brendan O’Connor and Chair of the Senate Inquiry into Corporate Abuse of the Fair Work Act Gavin Marshall.

“Again Leonie, Jane and Paul did a fantastic job of representing Collie and the South-West to put across the dire impact this dispute is having on local families and the local economy.”

“We were certainly encouraged by the support we received and assistance pledged to help us in this dispute.”

“Of particular note was the encouragement to make submissions to a national Senate inquiry into corporate abuse of the Fair Work Act.

“As a union we’ve now put those submissions in and will await the outcome, along with thousands more people in Collie, the South-West and now right around Australia.”

Ms Scoffern said the trips were exhausting but worth it to make sure more people knew the full extent of what our industrial relations system had condoned.

“We are not giving up and we’re not going away. That’s what Lanco is relying on but we will not give up this fight until we see some justice for our community and our families,” Ms Scoffern said.

“We didn’t pick this fight but we are in it now and we have no choice but do everything we can to see some justice for local families.

“We know this decision has implications for all Australian workers. We have to stand up not just for our community but for communities everywhere were big multinationals think they can treat people like this and get away with it.”