McCain trying to 'do it again'

AMWU members at McCain’s in Tasmania are planning industrial action, which may begin within days. They are campaigning against the company’s strategy of trying to wind back their conditions and take-home-pay.

The dispute at the potato chip processing plant in Smithton is coming to the crunch after all eligible votes from the workforce last week unanimously supported taking protected action.

Members are angry at McCain’s refusal to negotiate any further on its position of a new enterprise deal of 3% rise over two years in exchange for trading away a variety of conditions – including reducing weekend penalty rates.

Tasmanian State Secretary John Short said members had voted for industrial action as a last resort, but were absolutely determined to protect the value of their take-home-pay. 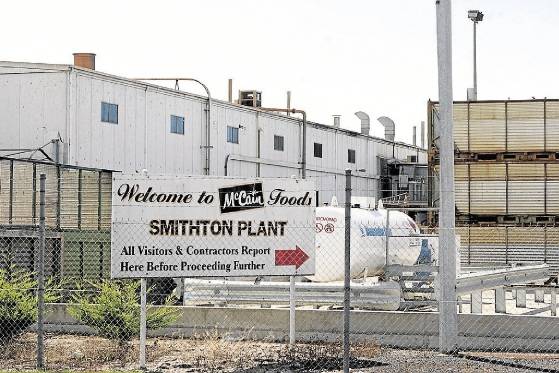 Among world's best: the McCain plant at Smithton.

“Workers would sooner the company came back to the table with a reasonable offer but that hasn’t happened, so there’s no way they are going backwards,” he said.

“Members just want a new agreement which protects their families’ standard of living and the conditions which have been part of the workplace here for 30 years.”

The multinational food company  is targeting a range of conditions including overtime pay, an allowance for night shift and weekend penalty rates.

The company in the past year has gained a contract to supply bagged chips (French fries) to Woolworths supermarkets on top of wholesale supplies for the fast-food market, meaning better productivity among its 75 workers around the wider range of products.

“We want to see a profitable company but we want recognition for our part, which includes the penalty rate cost for leisure time we lose with our families by working weekends,” a McCain members told AMWU News.

Workers also said the fall in the Australian dollar meant McCain’s plant was now more competitive with imports, which should increase profitability.

They have been told by local management that the Smithton plant was one of the best performers worldwide for the North American multinational.