Concern is mounting across Australia at the potential jobs impact from the wave of free trade deals, as AMWU members realise that in the future they could be competing for work against imported labour forces on substandard conditions.

The union has been hammering the message of the negatives of the China Free Trade Deal around the country; through social media, community campaigning and radio ads.

The giant Inpex Ichthys gas processing project off Darwin is the latest site where members have met and strongly opposed the China Free Trade Agreement (ChAFTA).

AMWU delegate Terry Barnes said many members had “hit the roof” when they realised the enormous implications of the China FTA, which allows workforces to be imported for $150 million projects with 15% of Chinese investment.

“There’s a feeling of ‘how has this been rolled out without proper public debate’ and ‘why weren’t the Australian people told more about this, why is it secret?’,” he said.

“If overseas workforces are permitted to be brought in for a project so the work is taken off us, what are our children going to do?” 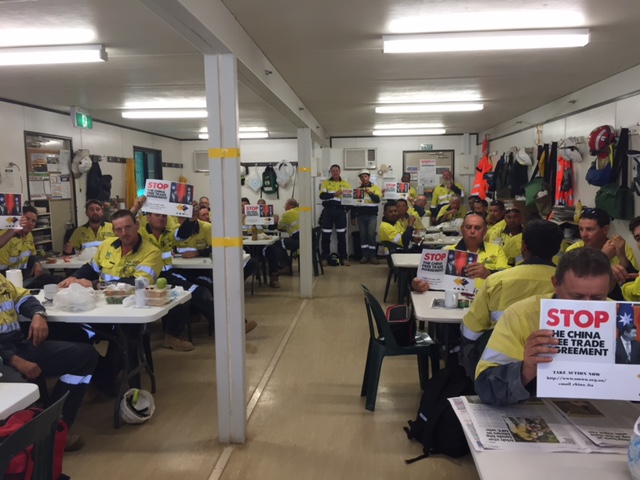 Hold it: union members on the Inpex gas site want changes to any ChAFTA.

AMWU NT Organiser Bryan Wilkins said the 400 AMWU members on the nation’s largest gas project were already frustrated that most skilled manufacturing work on the gas plant was done overseas, leaving imported modules to be assembled. Now the China FTA even threatened their labour.

“This is a giant project with two years left to run but the workers are already looking to the future,” Mr Wilkins said.

“There are no other major NT projects on the horizon, work in the capital cities may be hard to come by, then on top of that you have a free trade agreement which will open up the labour market and undercut our skilled trades.”

Many members asked about Labor’s national policy on Free Trade Agreements, set to be an important topic at this month’s ALP National Conference.

The AMWU is among unions urging the Labor Party to extend its policy opposing any agreement that includes Investor State Dispute Settlement (ISDS). It gives foreign firms the right to sue Australian governments for any local law they believe disadvantages them.

The past Howard Government and Labor Governments refused to allow ISDS in major trade agreements, but the Abbott Government have relented to secure agreements with South Korea, Japan, China and the Trans Pacific Partnership.

A Labor Government would not permit any agreement containing an ISDS, but this policy is not binding on the party when in Opposition, an inconsistency which saw Labor MPs support the recent free trade agreement with South Korea.