Ford workers gearing up for future

The AMWU keeps working with Auto Skills Australia and Ford on a careful strategy to ensure the 800 remaining employees at the company’s plants will be best placed for the next phase of their working lives after car production ceases in October.

The union is contributing to a communication program expected to be rolled out for the workforce progressively from mid-year, which is aimed at complementing the individual case management which Auto Skills Australia have been undertaking with most workers since 2013.

Members such as Darko Kraljevic have been offered one-on-one career counselling as part of the Ford Transition Project, with four out of every five workers taking it up.

“I’ve been here 35 years so have never had to do a job interview or write a covering letter to an employer but through ASA now I’ve gained the confidence to do it successfully,” he said.

“I’d like to stay at Ford, I’m applying for jobs here, but now I’ve got my security licence so I know I’ve got something solid to fall back on if I do finish up this year.” 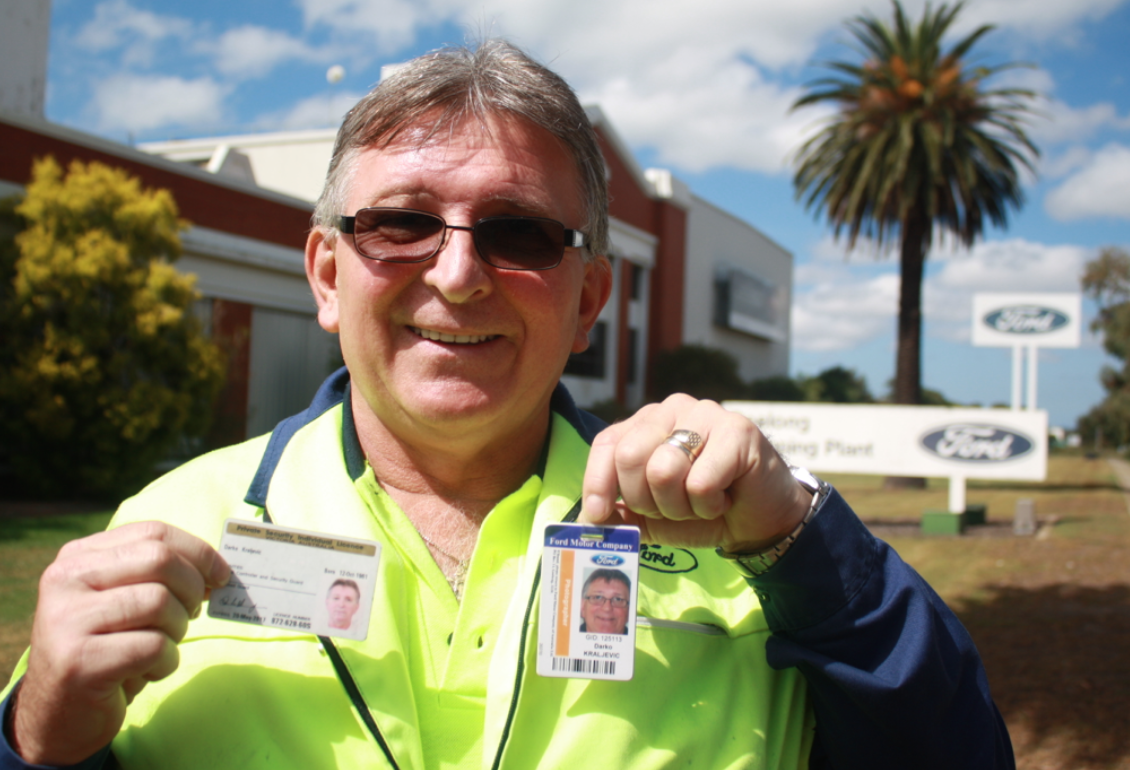 Passing all tests:  Darko Kraljevic shows his Ford identification and his new security licence, which he gained as part of the Ford Transition Project as he considers his career future.

AMWU representatives at Ford Geelong and Broadmeadows have been heavily involved at every stage of workforce planning, through our stewards on the FTP Reference Group and officials on the Steering Committee.

Mr Kraljevic said there had ben a strong take-up of training courses, particularly warehouse and logistics, and keen attendance at factory career presentations by Woolworths, VicRoads, Barwon Health, Vicpol and the Office of Corrections (Barwon Prison).

Over  400 workers have taken ASA advice at Geelong  alone since 2013, with tuition in specific areas including literacy and digital (computer) literacy also available to expand their computer skills beyond that required in the Ford workplace.

That is expected to be topped up in coming months with group consultations at Broadmeadows and Geelong covering areas such as financial planning and personal health advice.

“Some people have got jobs and a lot have gone through courses, there’s a heap of different training on offer,” Mr Kraljevic said.

“People are pretty upbeat, the ASA people, the boys from our union and the company are all working to help them.”

AMWU  Victorian Vehicle Division Secretary Paul Difelice said:  “We’re confident we’re doing the best we can to prepare our members with the knowledge and assistance to maximize their chances of finding new employment and that effort will continue.

“The experience of the Mitsubishi closure in Adelaide showed the union that individual case management was by far the best way to go in assisting members.

“We understand that everyone has different family and financial circumstances, individuals have different strengths so case management has been of real use.”