A mass protest rally through the city streets last Sunday week highlighted the anger and frustration of workers from three unions demanding reform of their four weeks on, one-week off roster from Inpex Corporation’s main contractor – JKC.

Other alarming issues include a culture of sending ill or injured workers back to work, continual safety breaches on-site, a vindictive management attitude, and an over-reliance on FIFO labour which has deprived the top-end community of promised jobs and business contracts. 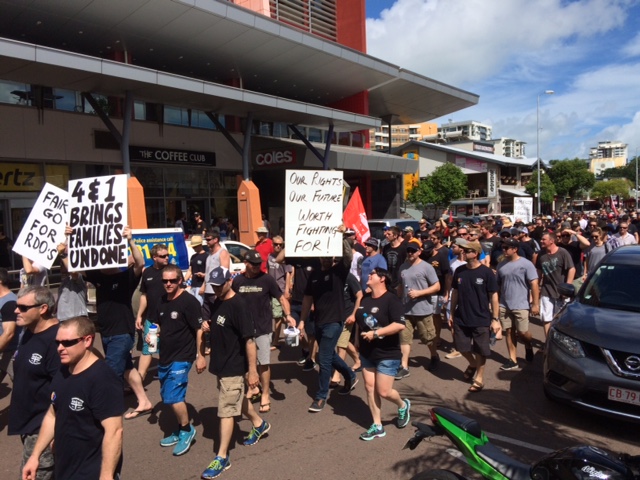 Hot and bothered: AMWU members and other unionists marched through Darwin and left no one in doubt about their feelings.

“These are the last FIFO workers left on a major Australian site with a 4-1 roster. Curtis Island had 3-1 and Gorgon in WA has won big improvements; so reform by JKC is badly overdue,” said AMWU Queensland-NT Secretary Rohan Webb.

“We’ll keep building pressure through protests, social media, and a new petition until JKC do more than pay lip service to the health and safety of its workforce.”

AMWU NT Organiser Bryan Wilkins said the 4-1 rosters were ruining the mental health and family lives of too many workers, further isolated by poor phone coverage at the former immigration detention centre at Bladin Point on Darwin’s outskirts, one of two main camps.

There was also no company bus into Darwin from camp and poor public transport.

“I’m seeing too many FIFO workers deteriorate, fatigued by rosters which keep them caught up in the work world of Ichthys while their relationships back home suffer,” Mr Wilkins said.

This was worsened by a punitive work culture driven by JKC’s determination to minimize any lost-time injuries, with recent incidents including:

*a member in a car accident passed fit at camp to work the next day, but then forced off the job with serious concussion and whiplash.

The AMWU, CFMEU and ETU are consistently finding blatant, on-site safety breaches, such as a corroded walkways, flooded work areas, and workers on tasks they are not trade qualified for.

Mr Wilkins said a start would be making rosters at least three weeks on – one week off, before the 3000-strong workforce expands late this year with construction of a major gas plant by JKC.

With an NT election due, unions are calling for adoption of the FIFO Code of Practice advocated by last year’s WA parliamentary inquiry into FIFO suicides. It includes even-time rosters, fatigue management, access to quality health services, and quality communications.

AMWU Delegate Terry Barnes said workers were steadily leaving the Ichthys project because of the pressure on their family life.

“Our RDOs were also taken off us, further reducing our time at home when every moment is precious.  Guys are seeking counselling,” he said.

“We’re into our third year of a five-year project and people are just fed up at being treated like crap.”