Families plead for Barnett to act on FIFO deaths

PRESSURE on West Australia’s government to take the mental health dangers to FIFO workers seriously escalated this week when family members of two workers who took their own lives presented a 4800-signature petition demanding action.

The AMWU supported Sharon Johnson and Peter Miller when they went to the WA Parliament to hand it to Liberal MP, Dr Graham Jacobs, more than a year since the Parliamentary Inquiry into FIFO mental health that he led reported.

WA State Secretary Steve McCartney condemned the Barnett Government’s negligent failure to implement any of the key recommendations of its own FIFO committee, which called for a new FIFO code of practice to be adopted by all WA mine operators.

Sharon Johnson, whose husband Anthony died last year, urged the Government to force mining companies to adopt a code which addressed rosters, fatigue, depression, workplace culture and improved accommodation with good communications with the outside world.

“Nothing has been done and these corporations aren’t going to go out of their way to make these changes unless it’s legislated and they are made to do it,” she said.

She said: “We have a blueprint, a solution, so why is nothing happening? How many more do we have to lose?” 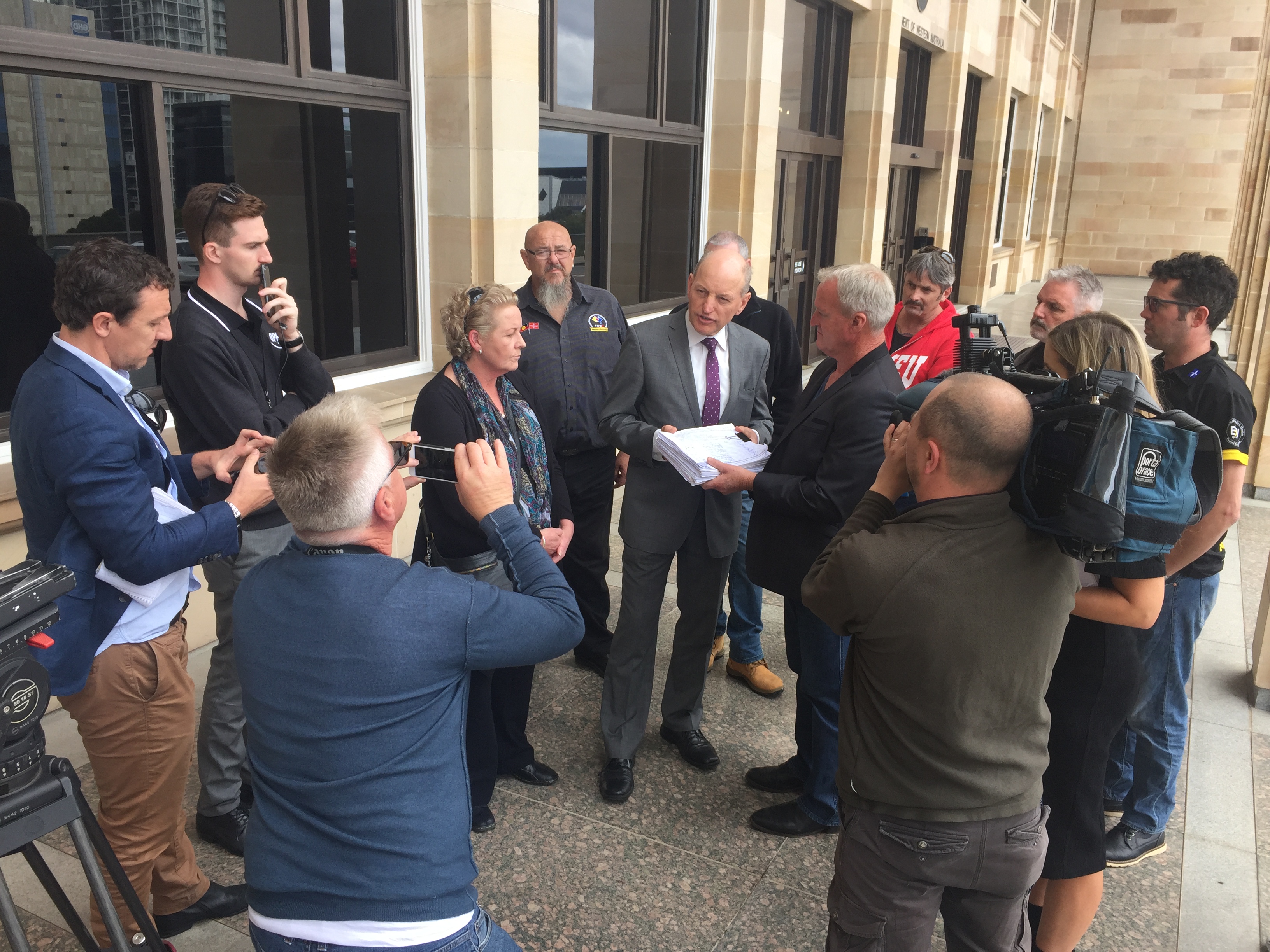 Plea to save lives: Peter Miller, whose FIFO-worker son suicided, presents the petition to Dr Jacobs as Mrs Johnson looks on. WA State Secretary Steve McCartney stands behind them.

Last year’s report recommended the Government change the law to ensure health and safety requirement apply to workers while off-duty at FIFO camps, not just on the job. The AMWU also supports a system of peer support among workers.

Mrs Johnson’s plight was highlighted when she revealed her husband’s employer Thiess had not returned her calls for a fortnight after she found him dead while on FIFO days off. The firm initially refused to pay his entitlements.

The death of Peter Miller’s son Rhys was among 12 suicides in a year which prompted the inquiry.

Mr Miller attributed Rhys’s death partly due to the isolation of his FIFO work from his young son, compounding the depressive impact of a relationship break-up.

Mr McCartney said rosters forcing employees to stay away from home too long were still used despite reform being the first recommendation of the inquiry.

The most common were four weeks on, one off, leaving some workers with less than five days at home every five weeks if they must travel big distances.

“Unions pushed for this inquiry and we welcomed the bipartisan report, which made a number of important recommendations including the establishment of a Code of Practice to address FIFO work arrangements and the negative impacts on employee’s mental health,” said Mr McCartney.

“All we’ve seen from the Barnett Government since the report was tabled, is inaction and a blatant disregard for FIFO workers and their families.

“Reform is desperately needed in the FIFO sector, and yet the State Government has abandoned hard working Western Australians and continues to put the big end of town first.”

Last year the AMWU and other unions won a 23 day-on, 10 day-off rosters on the Gorgon project.

Rhys Miller had begged his father not to tell his employer OTOC about his depression because he feared the sack. Mr McCartney said this culture persisted, with some workers not taking anti-depressives which may be detected in drug testing.