Do you wonder whether those extra overtime hours the boss pressured you to work were really worth it?  Well, this week the union kicked off a legal campaign for better overtime conditions.

The union is running a case in the Fair Work Commission aimed at ensuring that if an employer wants you to do overtime and promises time-in-lieu in return, then that must be calculated in line with the appropriate penalty rate – not hour for hour.

This means more in your pay packet for working after hours.

AMWU Industrial Officer Michael Nguyen put the case that for your first three hours of overtime you should get time and a half, then double the time worked after that, whether you were paid in money or by time-in-lieu. 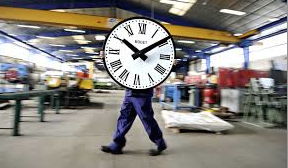 Mr Nguyen put the argument as part of modernising the awards covering  manufacturing, printing and graphic arts, food and beverage, the sugar industry and  aircraft maintenance.

The union backed up our case with the story of Perth printing apprentice Zach  Carleton, whose evidence about his boss asking him to do overtime will resonate  with many members.

“I did not accept the invitation,” he explained to the Commission.

Some employers also deliberately stall on allowing their workers to take time-in-lieu, instead saving it up to allocate at a time when orders and production was slow in order to get a double financial advantage.

National Vehicles Division Assistant Secretary Warren Butler said this was a hard reality in many smaller auto workshops and parts producers – and it had to change.

“It suits the employer to dictate when time in lieu will be taken, but that’s at the cost of convenience for an employee’s personal life and goes against the spirit of the award,” he said.

“That’s not what overtime is about, fairness has to work both ways.”

A decision by a Full Bench the Fair Work Commission on our claim is expected in coming months.