Ann Dwyer had a clearer view of how important the work of AMWU members at Sydney lens company Eyebiz Laboratories can be in the run-up to negotiating their new union agreement.

The AMWU delegate was talking with a friend about how the supplier to OPSM faces stiff competition from firms which fully import finished glasses when she heard a cautionary tale.

“My friend said she had ordered  glasses for her two little ones, aged four and eight, from a well-known cheaper glasses store but after a while they were having terrible problems with seeing properly,” she said.

“She took them to the eye specialist and he said the scripts were wrong, the glasses weren’t made up properly, perhaps the lenses weren’t ground properly.  It’s the second time recently I’ve heard a similar story.

“In the end she went to OPSM and got new glasses for the children – the opposition might sometimes be cheaper, but when it’s your eyesight, then good quality has to be most important. ” 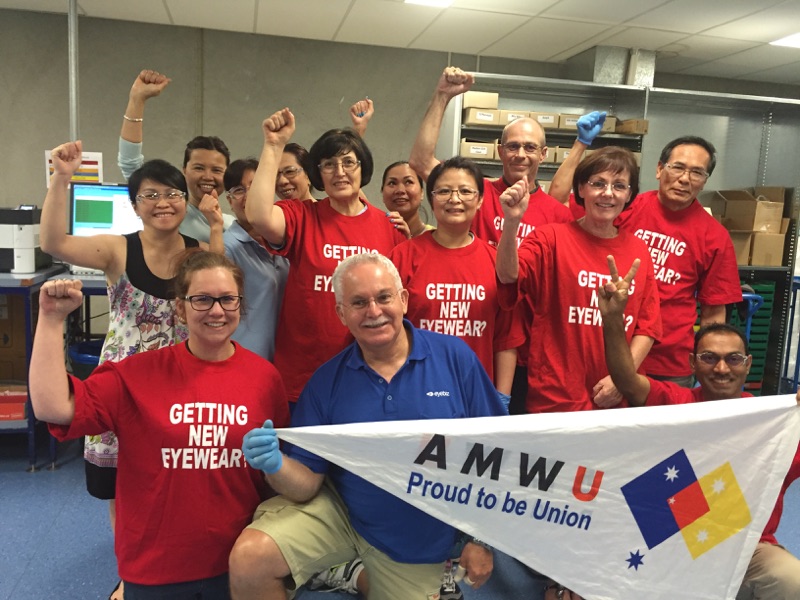 The eyes have it: Some of our AMWU members at Eyebiz pleased with the new agreement they are set to vote on. Our delegates P.K. Kumar (bottom right) and Ann Dwyer (right) worked hard to achieve real gains for fellow workers.

Ms Dwyer is among about 40 workers at Eyebiz Laboratories, where optical fitters carefully shape and fit lenses to order for frames, in contrast to competitors’ cheaper glasses which are usually imported in their entirety.

They supply OPSM and associated stores.

AMWU delegates at Eyebiz were pleased they had been able to reach a three-year deal which will keep the Sydney operation competitive while giving them a wage rise above inflation and closer consultation from management over a range of areas.

That includes consulting AMWU members over any workplace changes and working with the union to help members who have been on Workers’ Compensation to return to work.

Now it’s up to Eyebiz members, who are considering the deal this week and are due to vote on it next week.

Delegate P.K. Kumar said he believed the agreement struck the right balance between improving on the last deal but considering the local industry is under pressure from imports.

“We compare our agreement with conditions of other workers in this industry and we are well ahead because we have the union,” he said.

“We had very supportive officers, the union did the research and we believe we got a good result.”