Domestic violence: a tragedy which still effects our family

Many families have been affected by domestic violence, including my own extended family.

November 1 should have been the 21st birthday of my great nephew, Cameron, a time of celebration.

He should have marked his coming of age and been looking forward to his dreams and aspirations. Cameron was just nine months old when he was killed by his dad in a jealous rage on August 24, 1995. The details of his death 21 years ago are still too terrible to describe.

Cameron’s father was convicted of the murder of his son and sentenced to life imprisonment with a non-parole period of just 14 years.

He wanted to condemn Cameron’s mother to a life without her son and take away the love of her life. Many lives were destroyed that day.

What makes matters worse is the psychological wound is ripped open when Cameron’s murderer applies for parole. Each year when the parole board meet to assess his application Cameron’s mum and her family must relive their nightmare.

What would bring a man to commit this despicable crime against his son, an innocent baby, his own flesh and blood?

It is a question that we ask and one that is asked far, far too many times in our society.

As you look at the history of the relationship it was one fueled by jealousy and control, as well as emotional and psychological abuse.

It is difficult to understand how and why it could happen. Relationships should be based on friendship, respect and love, not jealousy and control.

It could be that someone who has not received love from a young age may, when involved in a relationship, become overly possessive.

In my view this explanation is too simplistic because men from nonviolent backgrounds can be perpetrators, in the same way not all men from challenging backgrounds behave this way.

Violence never has and never will solve anything.

We need a multi-pronged campaign to stop violence against women and children.

Addressing men’s attitudes and behaviours and funding support services to protect women and their children are vital elements of this campaign. However, at the heart of this issue is gender inequality in Australia.

This was emphasised at the recent launch of Australia’s first shared framework for the primary prevention of violence against women and their children, Change the Story.

The framework is an initiative under The National Plan to Reduce Violence against Women and their Children 2010-2022, which was established under the previous Labor Government.

Building on this commitment, a future Shorten Government has promised a $70 million package to make sure those suffering family violence can access critical services when they need them.

This package includes an $8 million investment to look at the interactions across family violence, law enforcement, justice, child protection and related systems to help identify opportunities to prevent violence through information sharing.

We need to work with men who perpetrate such crimes by providing them counselling and mentoring. We also need to educate boys from an early age about respect and dignity, and how people should be treated. After all, people are not possessions.

Recently, at the official opening of the Howrah Men’s Shed I was fortunate enough to lead the men of the shed and guests in the White Ribbon oath. It was a very powerful message.

I know it will take good men and strong men to stand up against this scourge on our society, especially violence against women.

The men’s shed and similar places will hopefully be part of the solution. The men’s shed will be a place where men will mentor other men in all aspects of life, teaching basic life skills and imparting good communication and relationship ideals.

John Short is the AMWU's Tasmanian  State Secretary, vice-president of the Howrah Men’s Shed and a Labor Senate candidate for Tasmania. This article also appeared in the Hobart Mercury.

Concern: the AMWU's Tasmanian State Council after members took the White Ribbon oath. John Short is second from the right. 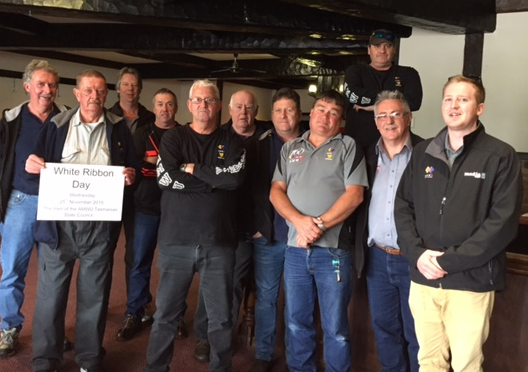