CSL should take no for an answer

AMWU members at the nation’s main supplier of blood products are stepping up protected industrial action as CSL continues a push to drive down their conditions despite its $1.89 billion profit.

Union members at the company’s main plant in Victoria will stop work for four hours this Friday and Monday after CSL management told delegates it would keep putting its substandard package to employees until they voted it up – now without any back pay.

That’s despite a vote last week by the workforce at Broadmeadows to reject the proposal, which gives a pay rise but effectively lowers performance pay and freezes key allowances.

CSL also wish to remove any job security for any new employee hired on a contract. 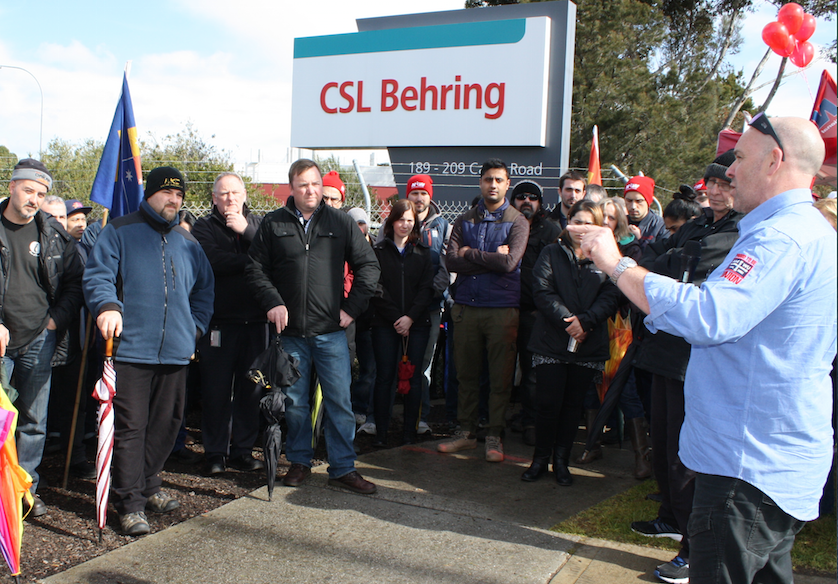 In talks this week CSL aggressively rejected a union peace offer and refused to reconsider their package, which falls far short of their big 5.5 per cent lift in international profit.

Their “groundhog day” plan is to put it out for yet another vote within a few weeks.

The AMWU’s 100 members in laboratory and maintenance have already imposed administrative and overtime bans, along with partner unions the CPSU and the ETU.

AMWU Assistant State Secretary Craig Kelly said members only wanted to protect  the value of existing conditions, with a modest overall increase in take-home pay to reflect their value in producing life-saving blood products used in hospitals and clinics every day.

In the last union agreement the AMWU secured 11.5 per cent over three years for members, which retained the real value of their allowances that CSL wish to strip back.

“Our members helped this company to its record profit, but all CSL give back is a sub-standard offer which leaves us with no other choice but to intensify  bans and stoppages,”  Mr Kelly said.

AMWU delegate Shannon Brooks said the real reductions in allowances would hit the hip-pocket of members who counted on these to supplement their wage.

He said CSL had upped their performance incentive offer for production managers while leaving the rest of the workforce behind in a cynical attempt to break down the “no” vote.

“Management considered our proposals for 22 minutes and came back saying no, no, no - so there’s no choice for us but to keep showing them we’re serious about defending our wages and conditions,” Mr Brooks said.