AMWU members protested with union comrades outside the main Victorian plant of pharmaceutical giant CSL today for a fair workplace deal in wake of its stunning $1.89 billion profit in the past year.

More than 200 employees stood near the main gate in Broadmeadows to demand CSL back down on its drive to cut conditions and allowances instead of recognising their crucial part in its massive profitability revealed to the stock exchange hours earlier.

The members urged colleagues not taking part in the four-hour stoppage to vote down a company deal including a pay offer over three years which falls dramatically short of its 5.5 per cent net profit growth for 2015-16.

The final result of the ballot on what our delegates describe as “the worst offer in CSL’s history” will be known in the next 24 hours. 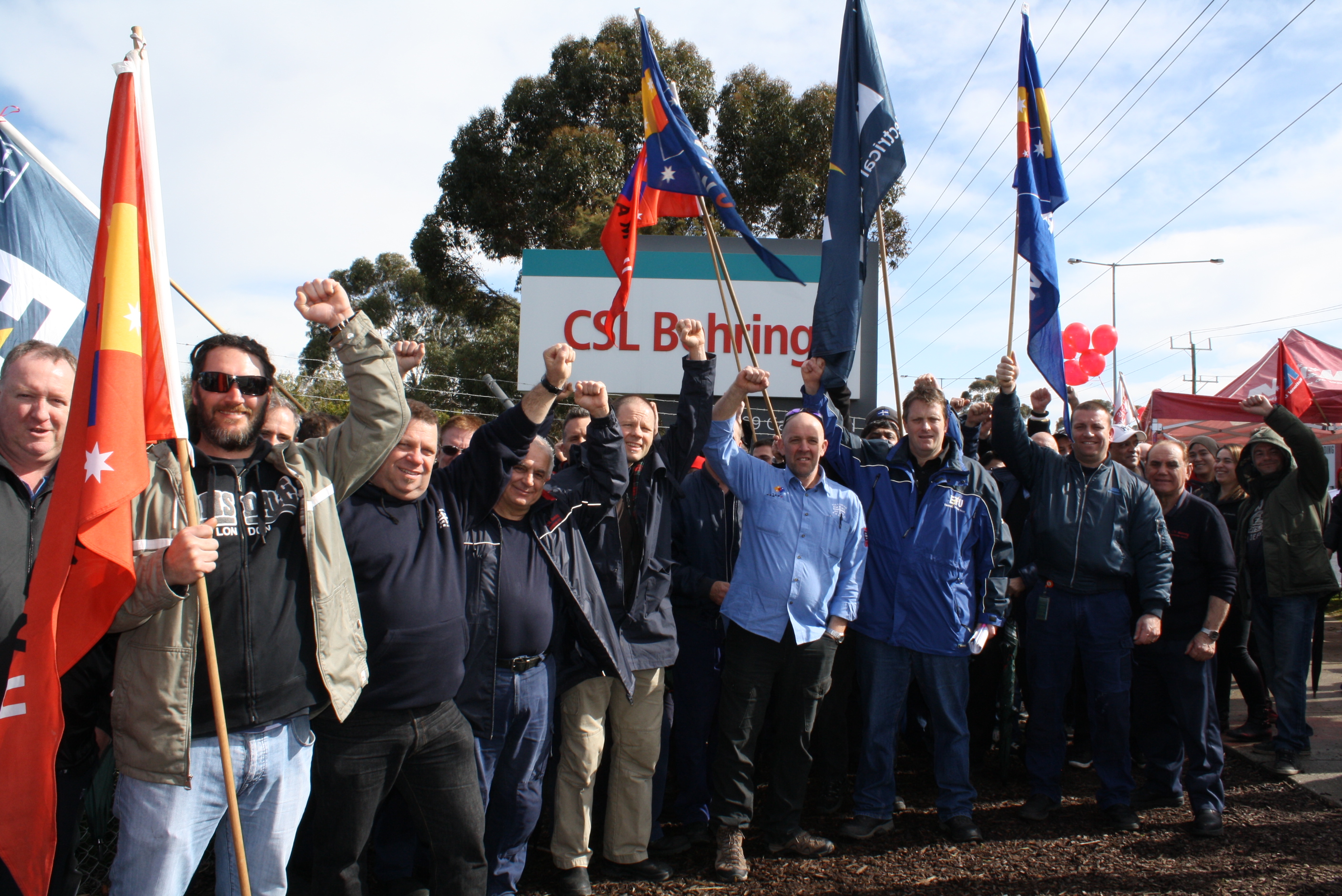 AMWU members, who make vital blood plasma products in CSL Behring labs and maintain factory equipment, have stopped work for four-hour periods and imposed bans on paperwork and overtime in protected action over the past week.

Our Victorian Assistant Secretary Craig Kelly said they were frustrated at the belligerent and antagonistic attitude of management, which had dragged bargaining talks out since March.

“It is high-skill, vital work for public health that everyone here is doing, at the high-end of science and technology,” he told union members.

“CSL rely on good, skilled people to deliver their products and profits. We just want our fair share, we want dignity – we deserve that.”

Members are prepared to rollover most aspects of their existing agreement, with a modest increase to overall take-home pay which reflects their contribution in real terms.

But CSL refuses to talk beyond a wage rise that freezes allowances for meals, cold-room work, emergency response and laboratory clothing at existing levels for three years.

It also wants to lower performance pay for some workers and deprive new maintenance employees of a fortnightly RDO which has long been a part of union agreements.

AMWU delegate Shannon Brooks said this would set back both lab and maintenance workers, particularly those relying on updated allowances to keep pace with rising household bills and food prices, to feed their families.

“The allowances are important, a decent pay rise is important and we know from CSL’s profit result today that it certainly won’t send the company broke,” he said.

AMWU members were joined in today’s action by fellow CSL unionists, members of the ETU, CPSU and NUW.