Tasmanian unions are set for a show of community support this Wednesday in Ulverstone for workers who were callously dismissed without warning last week as Simplot betrayed all trust in job negotiations with the AMWU.

Six workers were told by managers who arrived at the potato processing plant at a 6 a.m. shift changeover last Friday morning that they were instantly being made “redundant,” with a boss watching each clean out their lockers and escorting them off the premises.

Most had been working at the Ulverstone plant for at least 25 years, with union members too distressed to talk to company-hired counsellors who contacted them hours later.

Another worker was terminated on Saturday, with total dismissals expected to be 12.

The AMWU, which was given no notice of the sackings, is continuing a community vigil outside the plant in protest and has taken sought an urgent Fair Work Commission hearing.

The union has also organised a community gathering for 5.30 p.m. on Wednesday evening across the road from the Simplot offices and factory.

Unions Tasmania Secretary Steve Walsh and Labor Senator Anne Urquhart are among speakers scheduled to give their support. 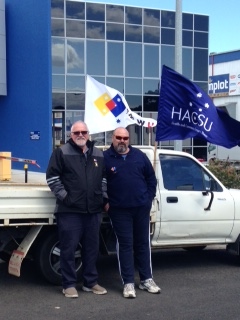 AMWU Tasmanian State Secretary John Short said the company had suddenly acted without consultation despite months of ongoing, detailed discussions with the union to work out an orderly  process for 10 planned redundancies at the Ulverstone plant.

He said there was no justification for the instant dismissals or falsely labelling them “redundancies”, as casuals had been brought in to do the work of four of those people sacked, with the company advertising for more.

Only two of the dismissed workers had previously expressed an interest in taking a  package.