The AMWU joined global protests last week against the Trans Pacific Partnership with rallies highlighting how it would let foreign corporations stand over any member nation’s right to enforce its own rule of law.

The effort saw unionists and community activitists take to the streets of Melbourne and Perth, targeting French multinational Veolia as an example of a company willing to sue a nation in an international trade tribunal for loss of profits from a government change of laws.

The protests outside the waste management  firm’s offices  were co-ordinated by a community alliance including SIGTUR, Australia’s peak union bodies and Friends Of The Earth.

Speakers all highlighted the secrecy still surrounding the TPP and called for the immediate release of its text before it comes before the parliaments of each of the 12 signatory nations. 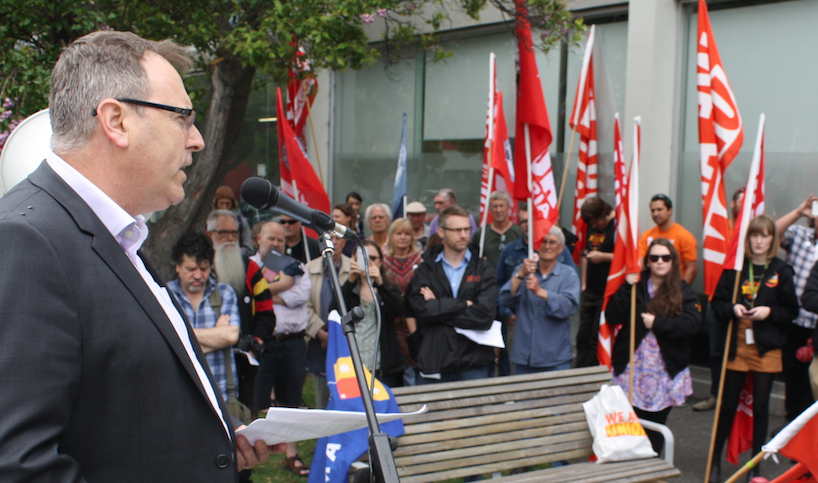 Veolia was singled out because it has used Investor State Dispute Settlement  (ISDS) provisions like those featured in the TPP.

It sued the Egyptian Government for raising that country’s minimum wage from $US53 to $US99 a month, which the company said was one reason it had lost its waste management contract in that nation.

AMWU Assistant National secretary Glenn Thompson said the use of ISDS lawsuits had exploded globally, with 10 lawsuits in 1994 rising to 300 by 2007 and 608 last year.

The litigants were mainly US and Eurozone corporations.

Mr Thompson said these treaty tribunals had no fixed composition – a lawyer prosecuting for a corporation could easily be sitting as a judge on another case within a few days, with no further avenues of appeal.

“This is about global corporates controlling Government policy in relation to our people, it’s about making sure global profits can’t be hurt,” Mr Thompson said.

“It’s outrageous that a government in a democracy can negotiate an agreement that has such an impact on our country and does so in total secrecy.”

He pointed out that judges, the Australian Productivity Commission and business journalists also had expressed serious misgivings about the TPP, in particular the ISDS provisions.

Australian Greens Senator Peter Whish-Wilson was concerned that the Senate trade committee he was a member of may be powerless to change the agreement when the text was released, or stop it from being rushed and rubber stamped through Parliament without proper scrutiny.

“ISDS are special clauses given to multinationals corporations to manage the commercial ‘risk’ of democracy,” he said.

“They are totally unnecessary, they add nothing to the flow of international capital except risk.”

A new US Peterson Institute study showed that developed nations would get negligible economic growth out of the TPP, with Australia getting a minuscule 0.5 per cent over an entire decade.

Australian Council of Trade Unions assistant secretary Scott Connolly told the Melbourne crowd: “If we sought to deliver an outcome to our union members like that at the bargaining table, we would be crucified.

“We wouldn’t do it, but we have a Government trying to ram it down our throats.”