AMWU members have stood up to corporate attacks with twin protests on both sides of the nation, just days after the voter backlash against the Turnbull Government’s disregard of working people.

Sacked brewery workers in Melbourne rallied at the head office of CUB (report below) on Tuesday, as families from the WA coal mining town of Collie protested in Perth outside the Fair Work Commission over wage cuts of 43 per cent for maintenance employees.

The Collie community protest marked the start of an AMWU appeal against a Fair Work decision to terminate the existing EBA, which means sudden pay cuts up to $50,000 plus a radically altered  mine roster.

The changes were due to take effect from next Monday but our union won a victory over multinational Griffin Coal when a FWC Full Bench agreed to suspend the decision until they decide on our appeal.

Striking workers from Collie, with their partners and children on school holidays, boarded buses or jumped in their cars in freezing darkness for the three hour drive to Perth for the morning protest rally.

Few had ever protested before, let alone at the FWC in Perth’s city centre, but up to 200 people defended their community from the fallout of the dramatic wage cuts sought by Griffin Coal , owned by India’s Lanco Infratech. 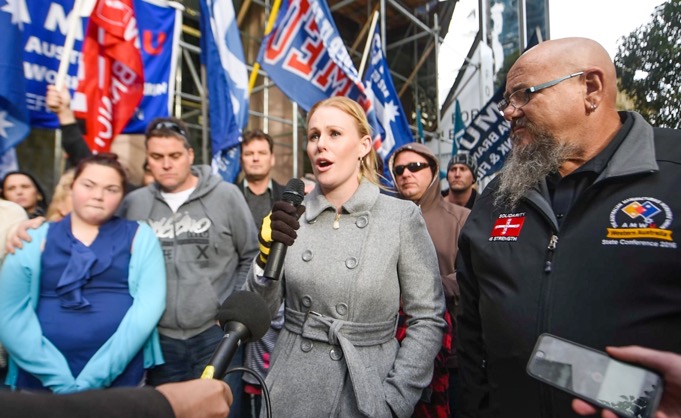 Collie clout: the partner of an AMWU member, Carys Golding, speaks at the rally.

Collie mum Carys Golding, married to an AMWU member, said this was a battle for the survival of small businesses across the entire local region, south-west of Perth.

“Sporting clubs won’t stay in existence because we won’t be able to afford to enroll our children into sport and many fathers won’t be there, they’ll have to work,” she said.

“Businesses won’t last because the money is not there to spend any more, people won’t be able to pay for their homes let alone put food on the table for their children.

“This is not just about a wage cut, it’s about a community which needs to stick together.”

WA State Secretary Steve McCartney reminded the protesters that the union had talked with Griffin Coal about concessions including a moderate pay cut due to the company’s losses over the last three years.

“The company laughed at them and said ‘not enough’, then they go back to the Commission and the answer is – go back to the award, send them back to 1986 wages,” he said.

Local MP Mick Murray said: “Jobs down the line like McDonald’s, the shoe shop, the vegie shop will all be impacted because of this Fair Work decision, which is a wrong decision – it should have never been made.”

Mr McCartney said if this termination of the award went through, it would have big wage ramifications for mine sites across WA.

Fair work, fair play (below): AMWU delegate at Griffin Coal, Wayne Chappell, with his grandson James at the community event in Perth. 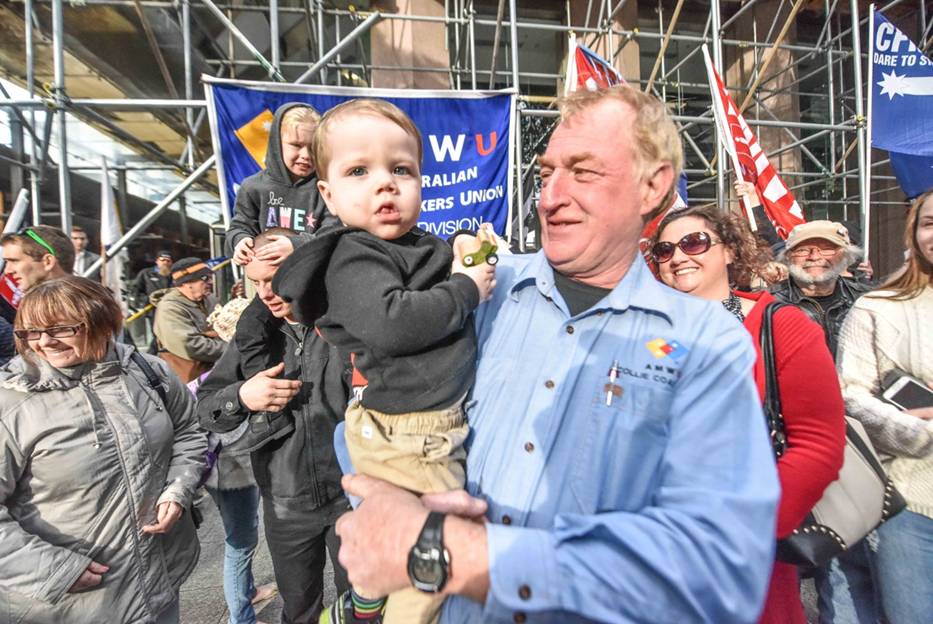