Members formerly at the Toowoomba Chronicle have tied the white ribbon against domestic violence tighter with a $9000 donation to help protect vulnerable women and children in their region.

The past AMWU chapel members of the Chronicle’s operations in Toowoomba, which were wound up last year, decided to put their accumulated chapel funds to three local causes including Relationships Australia’s family violence crisis service. 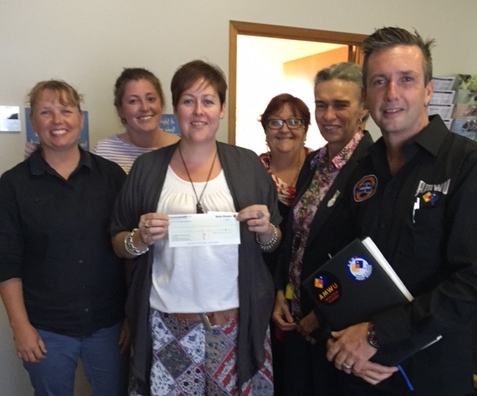 The funds will be used to assist women and children needing emergency accommodation, meals and transport when fleeing an abusive partner, as the RA crisis service gets no government subsidy.

Mal Moyes, the former Secretary-Treasurer of the AMWU chapel, said the 20 members wanted to help the community they had served for decades before the production of their newspaper was consolidated in Warwick with other APN titles.

“We were quite a financial chapel and the members wanted their contributions to stay local,” Mr Moyes said.

“We thought the cause of helping out the domestic violence service was valuable, it’s really concerning how big a problem this is in our region.”

They decided to also to fund a local hospice and the city’s CareFlight service, which provides a medical shuttle and emergency transport.

Relationships Australia Toowoomba covers a vast area including Chinchilla, Dalby, Warwick, Kingaroy and Goondiwindi, which has the second highest incidence of domestic violence among five regions in Queensland.

Manager Sonia Kupfer said staff were thrilled at the gesture from the all-male AMWU chapel, which would assist many women and children in an emergency.

“It’s so appreciated, we loved the fact that these men, good men, are saying that domestic violence is not okay and that’s what the White Ribbon campaign is all about too,” she said.

“It’s about men holding other men to account and giving a powerful message of assistance to those needing help.”

The AMWU is also an official supporter of the White Ribbon Foundation nationally.