CHAFTA campaign saving jobs at a Town Hall near you

The AMWU this week extended our campaign to protect local jobs with town hall meetings nationwide to force Canberra to further tighten the 457 visa measures applying to all future free trade agreements – including the China deal.

Our union agrees with the ACTU that the pact between the Labor Party and Coalition Government to beef up 457 Visa regulations to require stricter labour market testing is a step forward in improving protections for local workforces and reducing exploitation of foreign workers.

But ACTU town hall meetings in most states are seeing communities endorse the view that far tougher changes  are needed for  the China Australia Free Trade Agreement (CHAFTA) and the Trans Pacific Partnership to benefit workers rather than destroy jobs and conditions.

AMWU Queensland State Secretary Rohan Webb kicked off the renewed push by addressing a town hall meeting of over 100 people in Gladstone on Monday night, with meetings in other states rolling out most nights this week, then next month.

Federal Member of Parliament Ken O’Dowd (National Party) was invited in Gladstone but was a no-show.

“People were passionate over the threat to jobs from these trade agreements, we’ve forced small concessions from the Government but unions must keep campaigning because CHAFTA is still seen as a dud deal,” Mr Webb said.* 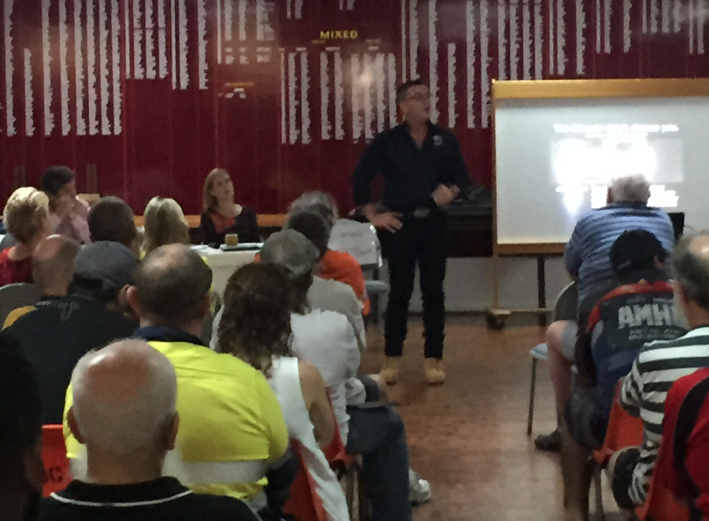 Due to union pressure, the Government has agreed to require employers to prove they have tried first for local labour on all projects exceeding $150 million and added extra requirements  including analysis of labour market needs, training plans and overseas worker support plans.

But AMWU National Secretary Paul Bastian has pointed out that too much still relies on the discretion of the Immigration Minister and no change to end undercutting of local EBA wage levels will be effective without a dramatic improvement in enforcement.

The agreement still does not go far enough in policing whether foreign workers have proper qualifications, with unions pushing for the need to compel employers to prove within 90 days that their 457 Visa workers have their  trade licence or have the visa revoked.

“Our campaign on CHAFTA will continue and I encourage our membership to attend town hall meetings and other activities in coming weeks,” Mr Bastian said.

*Our Gladstone branch office is holding a Family Fun Day on November 15 followed by meetings of delegates and officials on November 16 to discuss the challenges of CHAFTA and the TPP.