AMWU members at Bitzer have gone back to work in triumph after a nine-week  strike at the refrigeration firm ended with them winning a vastly improved deal while killing off harsh company demands.

Guard of Honour: AMWU organisers and activists congratulate the Bitzer members as they walk through the gate to return to work.

Our union’s organisers formed a guard of honour for the 54 workers as they marched back through the gate for their first shift early last Thursday morning knowing they won a deal which extends the 36-hour week to everyone, meaning two RDOs every month.

They achieved solid pay rises of 10 per cent over three years, guarantee of permanency for casuals after six months service and control over what hours they work  – the opposite of what Bitzer first demanded.

“This brilliant outcome is a powerful  signal to any employer wanting to erode conditions that they take on a united and industrially strong AMWU workforce at their own peril,” said Assistant State Secretary Craig Kelly, after addressing the members before their first shift back.

“Our Bitzer members were like a dog with a bone - they just wouldn’t let go and they bit back.”

Members agreed it was worth every bitterly cold day and night huddled around the fire outside the Sunshine factory, in a 24-7 protest which began in balmy April weather.

Their protected action shut down all production of freezer units for Australian supermarkets.

The determined mood around the AMWU camp strengthened as the weeks rolled on, with community support from workers at nearby industrial sites, visits from university students and donations from fellow AMWU members.

“We need to savour our victory, walk in with our heads held high because this is a victory to give heart to all unionists,” AMWU organiser Alistair Thomas told members before signing off on the deal.

Their solidarity forced Bitzer to axe the separate shifts brought in a year ago, which  disadvantaged many workers.

Now, everyone will go back to their traditional 7am – 3.30pm roster and those work hours can only change by a majority vote.

Members also gained access to WageGuard income protection  and the opportunity for extra pay through re-classification of competency standards.

Bitzer’s efforts to downgrade conditions and pay for new workers all fell flat, with no cuts to casual wages after a proposal to reduce them by a third.

“I reckon they wanted to divide us, they wanted new people coming in on very low minimum wages to slowly undermine our majority of permanent workers but it won’t happen and it never was going to happen,” said one of many happy AMWU members.

(below) Final day: Some of the proud Bitzer members outside the plant before their AMWU officials went back in to sign the agreement. 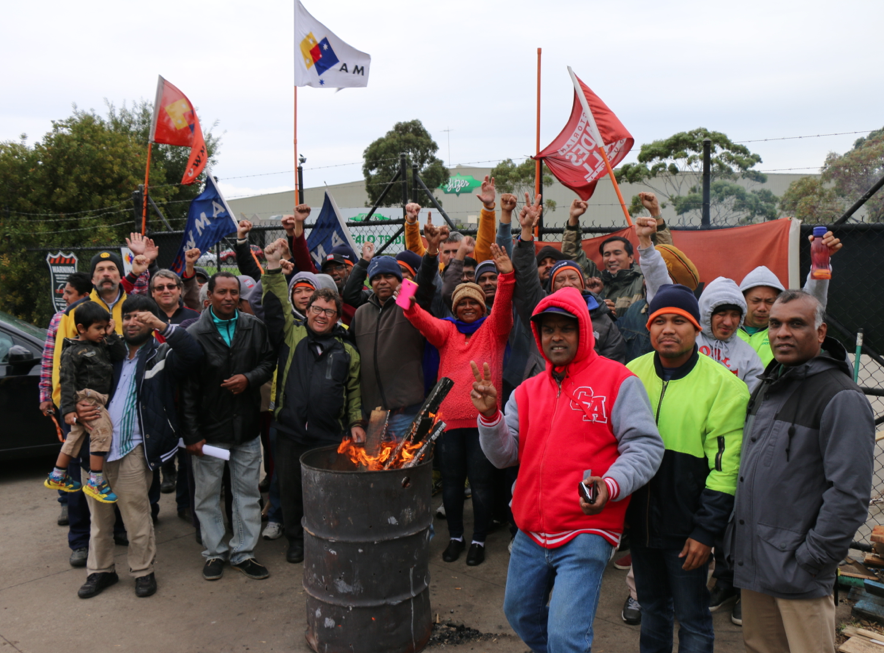