Big win on ships not watertight without subs

The AMWU has claimed a huge win for it’s community shipbuilding campaign and welcomed Federal Government adopting a continuous build of surface warships over coming decades.

“This vindicates the work that members and activists have been doing on the ground for over two years,” said AMWU Assistant National Secretary Glenn Thompson.

“Is it everything we want? No. Will we still see job losses? Yes. But make no mistake – without this campaign by members the Federal Government would never have acted at all.”

Mr Thompson stressed that navy shipbuilding will be unable reach it’s potential unless the new submarine fleet is also built in Adelaide.

“The announcement is very welcome but we have to keep our eyes on politicians – they have a habit of promising things and not delivering. We’ll be holding these promises to account.”

The decision to bring forward the future frigates program to 2020 and to begin the patrol board replacement program in 2018 was announced by PM Tony Abbott in Adelaide, where the Liberal Party faces an electoral hiding for abandoning jobs and industry.

While the $39 billion build will eventually secure at least 2500 shipbuilding jobs, it is too late to prevent the workforce declining to 1000 before new work begins and there is no guarantee yet on the future of any Australian shipyard outside of Adelaide.

“Faced with a voter backlash, this Government has finally adopted what our union members and defence industry experts have told them all along about the need for a rolling build of naval ships,” said Glenn Thompson.

Mr Thomson said the crucial detail on the percentage of Australian content and build required in the tender processes would remain a mystery until the Defence White Paper due at the end of 2015 – as would the fate of the subs.

He noted that the PM had prioritised “value for money” over the need for “ maximum Australian-build.”  The announcement gives no comfort to BAE Systems or Forgacs workers.

“The Prime Minister now claims the Coalition’s election promise to build the 12 submarines in Adelaide was a case of ‘overreach’ but he should know voters there will be reaching for the Coalition’s throat at election time if that build goes overseas,” Mr Thomson said.

“This surface ships decision alone won’t satisfy workers and their families worried about their kids’ future and certainly not shipyard workers in Williamstown or the NSW Hunter.

“The German bidders have publicly stated they can build subs more efficiently and cheaply in Adelaide, so if the evaluation process is fair that must override any sweetheart deals Mr Abbott has with Japan’s PM.” 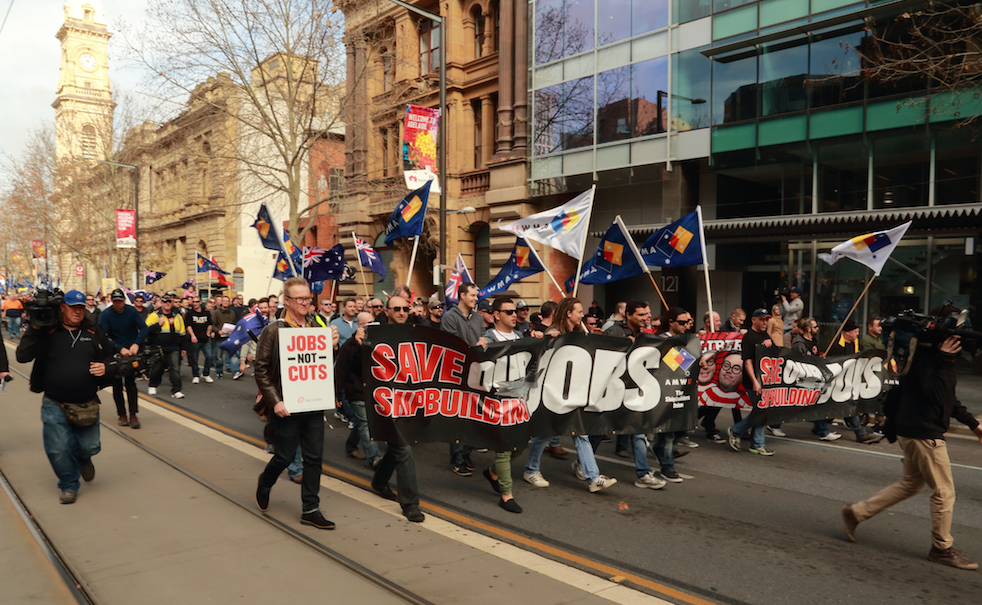 Great win for Adelaide: the pressure that AMWU shipbuilders put on the Abbott Government - including last week's protests - resulted in securing a future rolling build of surface warships.